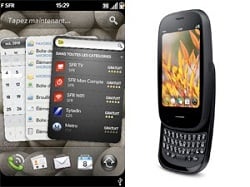 The pieces for the upcoming Palm Pre 2 are coming into focus. We’ve seen signs that it will have some refined hardware and leaked documents indicate it could also be coming to Verizon in the not-too-distant future.

The good folks over at Engadget have obtained a screen shot from Verizon’s internal training portal which show that the Palm Pre 2 is on the way. There’s no additional details but it’s a solid indication that it could launch on Verizon first.

Previous leaks have shown us that the Palm Pre 2 will have a 1 GHz processor (probably a TI OMAP one), more RAM and a refined screen. Don’t expect a super fresh new design, as it will essentially be the same Pre but with a few tweaks.

That shouldn’t be too big of an issue because I did like the design intentions of the original Palm Pre but felt the execution could have used some help. The keys were a bit too small and the build quality just didn’t seem like it was fitting for a top-shelf smartphone.

It wouldn’t be too surprising to see Verizon land the Palm Pre 2, as the carrier did offer the previous version. It even offered free mobile hotspot after the device failed to sell well.

It’s unclear if the new webOS device will land on AT&T, Sprint or T-Mobile but I would hope that Hewlett-Packard and Palm will be able to get it on multiple carriers.

The new device should also have webOS 2.0, which is expected to add a variety of new features to the solid platform. We know it will allow for “stacks” of the cards and let’s hope that it also fixes some of the performance issues that popped up with previous versions of the software.

Are any of you interested in the Palm Pre 2?

Google announced its 3Q earnings, and they killed it. During the conference call, the search giant spoke briefly about Android,...