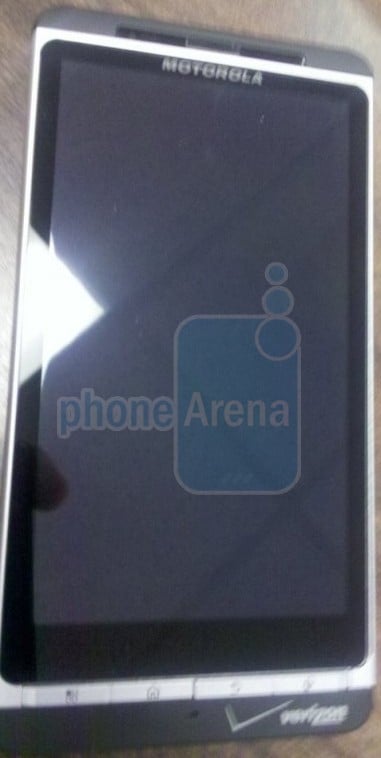 Possible good news for Android fans as a new variant of the Motorola DROID X may be headed to Verizon Wireless. The Motorola DROID X SE, a name that reflects its “Special Edition” or “Silver Edition” status, was spotted in a leaked photograph sent in to Phone Arena. Externally, this DROID X SE handset sheds the black bezel of the Motorola DROID X and replaces it with a silver one. A rear shot of the handset is not available so we do not know if this silver styling extends to the back of the handset, too. Under the hood, this Motorola handset is rumored to include the same 1.2GHz processor thought to be in the DROID 2 Global. Additional details are not available but we can presume this handset shares many of the same features as its popular cousin, the black DROID X.

As with all leaks of this nature, take this one with a grain of salt as there a few anomalies that cast doubt upon the validity of this image. Notice the placement of the Verizon logo in this leaked handset and how it differs from the DX as shown above. This pictured handset, similar to the Motorola DROID and the DROID 2, places the Verizon logo in the lower right hand corner. On the DX, though, the Verizon logo is centered below the display. Yes, Verizon could ask Motorola to change the placement of its logo, but it would be easier, from a manufacturing point of view, to keep the same overall design for these minor features.

Also notice the odd shape of the silver bezel as shown above. Especially at the top of the handset, the silver bezel of the DROID X SE appears to be much thicker than that of the DX. If you look closely at the DX, it has nice, slim black bezel on the sides and top of the handset. It is possible that I am wrong and this last observation may be an artifact derived from the angle of the photo and is not necessarily a sign that the handset is a fake. It is also posible that this pictured handset is not a future handset but a prototype of the DROID X that was produced to compare a silver versus black design. Until more details are unveiled via unofficial leaks or official press releases, I will have to leave this one in the rumor mill where it belongs.

Angry Birds for Android tops 1 million downloads in one day

Rovio launched its full Android version of Angry Birds on Friday and the popular multi-platform game caused a stir. The...