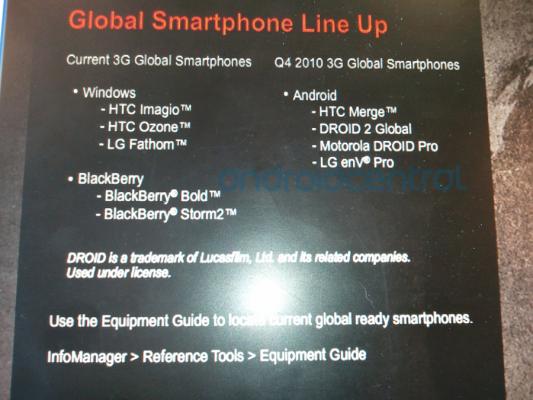 A leaked document from Verizon possibly provides  list of several upcoming Global Android handsets slated to hit Verizon Wireless. The five Android offerings listed in the document include the DROID 2 Global, DROID PRO, the HTC Merge and the LG EnV Pro. These five handsets are know to us and have hit the headlines as a rumor or an official announcement in the past few months.

The DROID PRO is a unique portrait QWERTY handset that was officially announced by Verizon at the beginning of the month. This PRO Android handset includes a 1GHz processor, a 3.1-inch touchscreen display, 5-megapixel camera, DLNA, and Android 2.2 with Adobe Flash support. It’s expected to land in the upcoming weeks so its inclusion on a Q4 2010 roadmap is expected.

Originally and mistakenly thought to be be DROID PRO, the DROID 2 Global is another DROID variant headed to Verizon. Earlier this month, references to the handset appeared briefly on Motorola’s website and hinted at a handset with a 1.2GHz processor, Quad-band GSM, 5-megapixel camera, and Android 2.2. Training documentation for the D2 Global has reportedly appeared in Verizon’s internal system which suggests the handset will possibly land before the end of the year.

The HTC Merge, also known as the HTC Lexikon, has been spotted in Verizon’s inventory, photographed in the wild, and even reviewed and benchmarked prior to any official announcement by Verizon or HTC. Leaks suggest that this is not a DROID-branded handset and will launch with Bing as the default search engine.

Last but not least, we have the LG EnV Pro. Presumably the launch name for the enV Touch 2, this Android handset was tipped by Engadget back in August. The enV Touch Pro is the expected to successor to the current enV Touch, a popular feature phone and the latest offering in Verizon’s long line of enV handsets. While details are sparse, this handset is beautifully marketed. It leverages the enV name to snag feature phone users and entice them to jump into a smartphone with a smartphone data plan.

Of course, this is a leaked document and must be regarded with some skepticism. Intuitively, the Q4 launch of all these handsets fits in with earlier rumors but launch plans such as this can be changed for a myriad of reasons.

Rumor: Costco to drop the iPod and iPhone due to iPad snub?

Costco may have some clout in the retail world - it is the largest membership discount chain in the US,...