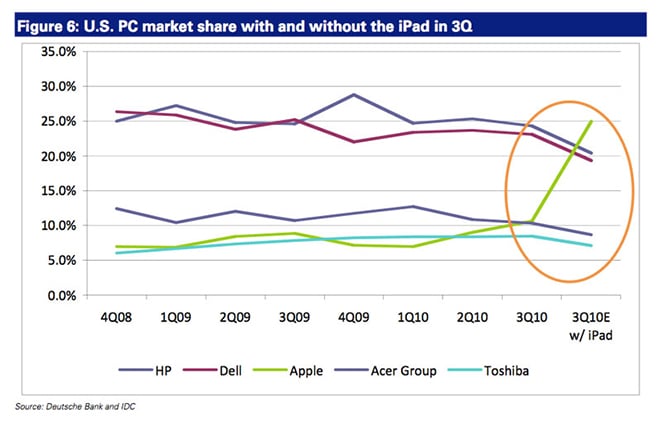 This is an interesting concept to mull over: do you group the iPad into PC sales figures or keep it as a separate category? Analyst Chris Whitmore of Deutsche Bank took the former approach and considered Apple’s position in the PC world with the iPad as a consumer PC device. The startling Q3 2010 results reveal that Apple would be propelled to the top spot above Dell and HP when its tablet device is grouped under the PC umbrella.

Currently, Apple holds a 10% market share with its line of popular but expensive line of consumer desktop PCs and notebooks. The Cupertino company is estimated to have sold about 2 million units domestically in Q3 2010 which places it on par with Acer but far behind market leaders Dell and HP. This figure is up 24% since last year and represents excellent growth for Apple’s PC business. While Apple jumped up 24%, the entire PC market grew a meager 4% year over year in Q3 2010.

Things get interesting when you throw the iPad sales figures into the mix. With iPad sales estimated to be 3.2 million in Q3 2010 alone, Apple would be able to boast of over 5 million units sold and would jump up an amazing 250% year over year in this latest quarter. With sales from its tablet device, Apple would gain a 25% market share which would put it above Dell’s 19% and HP’s 20% share. The entire market would receive a boost from the tablet as PC sales figure would see a 24% increase year over year. An impressive set of figures for a single tablet device from one manufacturer.

While these stats are thought provoking, the lingering question remains- is the iPad a PC similar to a netbook or a new type of device that deserves its own category? Those favoring the PC side point out that the iPad is constantly compared to PCs and PC manufacturers blame the tablet when trying to explain lagging netbook and even notebook sales. If it wasn’t a PC, why would it be stealing sales from the PC market?

Others perceive the iPad as a new breed of device- not quite a PC and not quite a cell phone. Those with this alternative view assert that the iPad deserves its own category and people just need to wait for other tablet devices to enter the market for this category to begin to flourish. I lean towards the “new category” argument but I would love to hear other people’s opinions. Sound off in the comments about this analyst’s look at the iPad from a PC perspective and let us know if you think it holds water.

Microsoft held its little shindig in New York City last week to unveil Windows Phone 7 for the press. And...