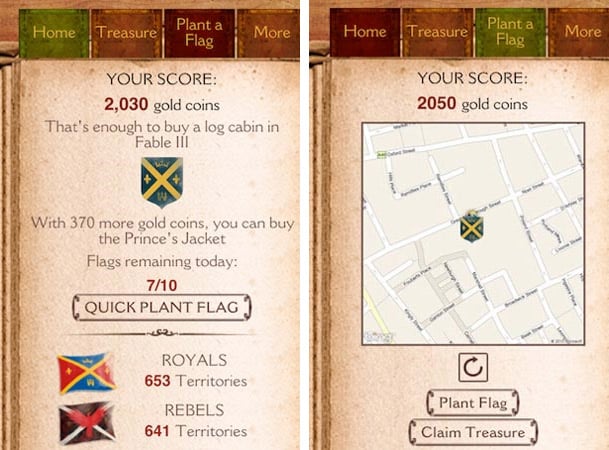 Microsoft has launched a Foursquare-like location game called Fable III: Kingmaker for the Android and iOS platforms. The game is envisioned as a free companion to the forthcoming Xbox 360 title and apart from promoting it [Xbox game], I don’t see some other reason why the Redmond giant is committing its resources on other (non Windows Phone) mobile platforms.

Anyway, Fable III is a European thing only at the moment and should be available in most iTunes stores across the continent. The game is tied to the web, requiring users to register with username, email and password.

Once that is set, you can pick your side (Rebels or the Royals) and get 10 flags per day to place on the game map. Your location is based on your smartphone’s location, and if you opt to seriously play, you’ll have to travel around to “enemy locations” to drop your flags and eventually get control of a territory.

Each planted flag brings you 50 coins, while new location tagged earns you 100 coins. Additionally, specific real-world locations get you treasure pots of 2,000 or 5,000 gold. As for the UK, these locations are mostly game shops, though you gotta act quick as after 100 people have collected treasure, it disappears.

If you’re still not convinced whether this is worth your time, the following demo video could be of help.