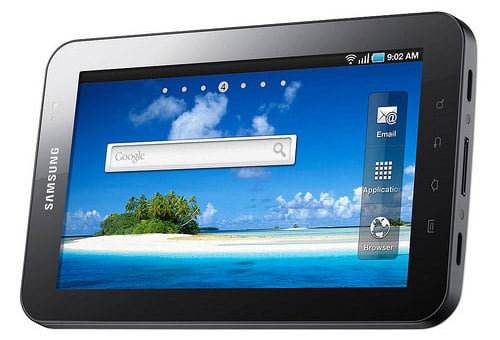 Verizon confirmed that the Samsung Galaxy Tab will land on November 11th for $599. The Galaxy Tab is an Android-powered tablet that includes a 7-inch touchscreen display, 1GHz Cortex A8 Hummingbird processor, dual cameras (3MP and 1.3MP), 3G connectivity, WiFi, and Android 2.2. The pricing for the Galaxy Tab comes in slightly below the $629 price tag of the 16GB Apple iPad 3G+WiFi model. From what we can tell from the press release, this $599 price point does not include a contract and the Galaxy Tab will launch without any carrier subsidies from Verizon. The Galaxy Tab will be available with a month-to-month $20 data plan that includes 1GB of data.

Full press release is after the page break. Anyone going to scoop up this tablet at its $600 price point or were you hoping for some carrier subsidies?