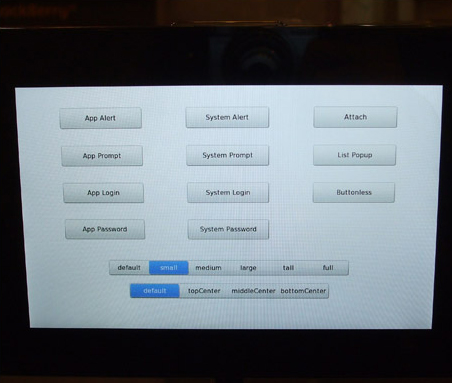 RIM has been displaying the BlackBerry PlayBook tablet in an untouchable plastic prison since launch, which hints that, as you might expect, the Neutrino OS by QNX is still very much a work in progress.This picture was snagged at the Gartner Symposium in Orlando, where it looks like the PlayBook was somehow derailed from its eternally-looping promo video and reverted to an administration screen.

Just as a quick refresher, the BlackBerry PlayBook is RIM’s first tablet, and promises to butt heads directly with the Samsung Galaxy S Tab and iPad with a dual-core 1GHz processor, 1 GB of RAM, Wi-Fi a/b/g/n, 7-inch 1024 x 600 capacitive touchscreen, HD-capable 5 megapixel camera plus 3 megapixel front-facing camera for video conferencing, HDMI-out, and a brand new operating system with Flash-friendly browser. It’s being positioned as something of a smartphone companion that can pull data from your BlackBerry and show it on a bigger screen, all without violating sensitive IT policies.

It’s more likely that this is a screenshot of a stable, low-key placeholder operating system rather than any discernible version of what the PlayBook will launch with, but it does show that RIM and QNX really aren’t ready for the public to see anything more than the bare minimum. We’ve seen the marketing for the PlayBook, so obviously we can expect something a might snazzier come launchtime.

Here’s a video of what the BlackBerry PlayBook should run once it’s out in Q1 2011, but we’ll wait until we have the thing in our hands to believe it. If you’d like to explore the upcoming tablet a bit more, check out RIM’s minisite.

[Update]
I just heard from RIM that what is being shown here is at the application level, not the OS. Apparently they were giving hands-on demos at one point at the conference and they just forgot to switch this one back. So much for not being comfortable showing off the PlayBook, eh?