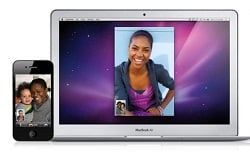 We know that Apple is bringing iPhone features to the Mac but it looks like the FaceTime on Mac feature may have a small security flaw. Once you’ve logged in to FaceTime on the Mac, other people can monkey with your Apple ID or change your passwords while FaceTime is still running.

There’s also reports that FaceTime on the Mac will also display your password in the expected field when restart the application. This means that someone else could potentially get on your computer and not have to know your password when they launch FaceTime.

To be fair, this is still a beta, so some bugs are expected to be found. Additionally, these are also problems that exist when using your computer in any public setting. TUAW has a good take by saying, “In related security news, cash registers left unattended with their drawers open are likely to be robbed and cars left running with the doors unlocked are likey to be stolen.”

So, some of the security concerns will be present when it gets to the final stages but if you’re a worrier, you may just want to stick with using Apple’s video-chatting service on your iPhone 4 or iPod touch.

The web media-savvy Skyfire web browser has finally gotten real on the iPhone. This is great news for all you...