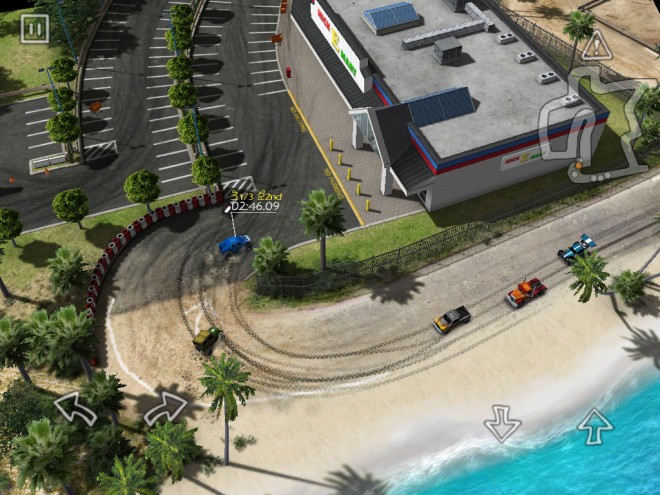 Back in July, I attended a press event held by EA to showcase some of its upcoming games. One title in particular caught my attention as it reminded me of the old-school NES classic, R.C. Pro-Am. The game was called Reckless Racing and EA Mobile has just released it on both the iPhone & iPad, as well as its first mixed martial arts game, MMA.

Reckless Racing is a top-down racing game takes full advantage of the iPhone 4’s Retina Display by offering a high amount of detail as the game was designed from the beginning to offer crisp and detailed graphics.  The game features 5 different tracks to race on across 3 race modes: Dirt Rally, Hot Lap time trial, and Delivery time trial. You’ll be able to race across tracks that include a number of road types such as dirt and asphalt in a number of vehicle types. The game also features online multiplayer if you’ve had enough with playing AI opponents.

The second game EA released was its first game that takes players into the world of mix martial arts fighting. MMA features over 20 real MMA fighters such as Randy Coutoure and Ken Shamrock, or you can even create your own fighter with customized weight class, fighting style, and especially your look and attitude. Your customized fighter will also be able to train to boost your attribute points. You can then take your customized fighter into MMA’s career mode to hopefully become an MMA superstar. As you progress through the game, you’ll also be able to unlock challenges that require you to take on specific scenarios. If you just want to grab your iPhone and start duking it out, MMA also has an Exhibition Mode to feed your need for some action on your morning commute.

There has been a lot of word going around lately regarding AT&T and its iPhone exclusivity, namely that it would...