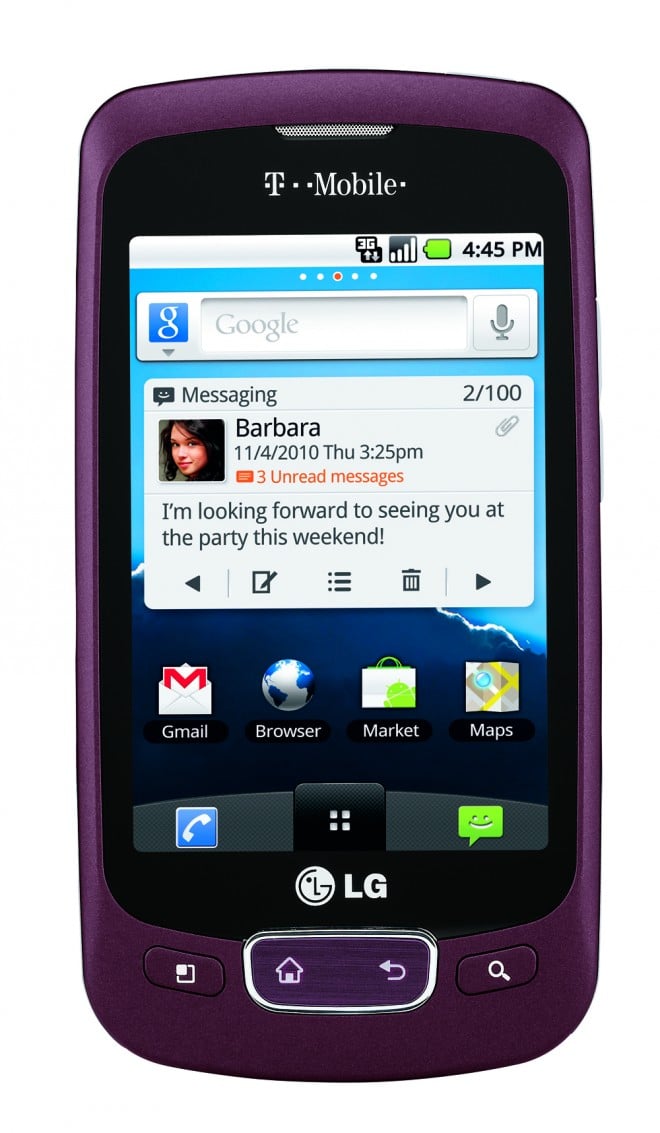 T-Mobile is bringing quite a few new Android handsets this holiday season, including the MyTouch 4G, the Huawei Comet and now the LG Optimus T. The Optimus T is said to hit Magenta’s shelves come November 3rd and will cost a mere $29.99.

Once the Optimus T hits T-Mobile, we can expect that third-party retailers like Amazon and possibly even Best Buy may offer the handset for free. In either case, $30 for a smartphone running Android 2.2 isn’t bad at all. The Optimus T may not be the most powerful smartphone around, but it offers a handful of features you won’t find on your previous feature phone you’re upgrading from.

The Optimus T features a 3.2 inch HVGA touchscreen, 600 MHz processor, a 3.2 megapixel camera with no flash, pre-installed 2GB MicroSD card, GPS, WiFi (with Mobile Hotspot option), Bluetooth, 170 MB internal storage, and 1500mAh battery.  Even with the limited internal memory, since the Optimus T is running Android 2.2 Froyo, you can throw some applications onto your SD card if you so choose. We also may find WiFi calling on-board soon after launch if the T doesn’t ship with the feature right out of the box.

The new handset will join the ranks of a new category of Android phones, budget smartphones. The older tech used in these handsets isn’t going to suit power users but it could be perfect for a first-time smartphone buyer. Motorola recently unleashed an arsenal of budget Android handsets, so it will be interesting to see how the adoption of these handsets go.

We’re not jumping for joy about this phone, but we’re happy that it exists, as there aren’t too many handsets that can do so much while costing so little. Such handsets will only spread Android farther into demographics that other competitors can’t, or won’t get into.

Check out our hands-on video of the device below and let us know what you think.

When Google Instant launched this past September, we were told that it would launch for mobile phones sometime this fall,...