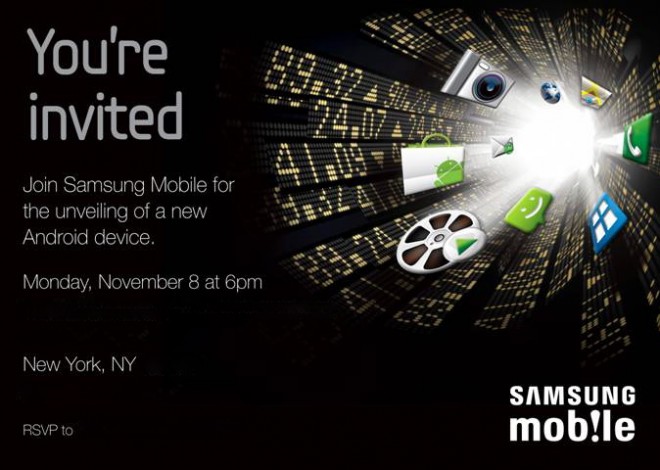 Samsung is sending various media organizations an invite to an event scheduled to take place on the 8th of November, and saying that they’ll be launching a “new Android device”. We’ve got our thinking caps on, and we’re trying to guess if this is a handset we’ve seen before in another territory like Asia or Europe, but the best prediction we can come up with is that this will be one of the very first devices to run Google’s new Android 2.3 operating system, code name Gingerbread. From the stock icons used in the media invite, to the persistent rumors we’ve been hearing that Samsung is highly interested in selling stock Android devices, all clues are leading us to believe that this is going to be the first of one of the next generation of Android devices.

For far too long (less than a year, but it feels like ages) we’ve been stuck with 1 GHz Snapdragon processors and 800 x 480 pixel resolution screens. In Samsung’s case, since they manufacture both processors and screens, they were the first to use Super OLED and their Hummingbird processor. Are we going to see something utilizing a higher resolution screen? How about a dual core processor design? How about something with enough graphic horsepower to make the iPhone look like a car phone?

All will be revealed in a fortnight. That gives us two weeks to poke and prod our sources, for you, our lovely anonymous tipsters, to send us information, and for the Chinese and Russians to get a hold of any and all leaks they can find on the factory floors that are right around the corner. It can’t be the recently rumored Galaxy S2, that’s more of a Mobile World Congress type announcement. Whatever they announce, if they don’t ship it immediately then holiday sales might be impacted by people preferring to wait for this hot new piece of kit.

When RIM announced their first tablet a few weeks ago, the BlackBerry PlayBook, Flash support was one of the big...