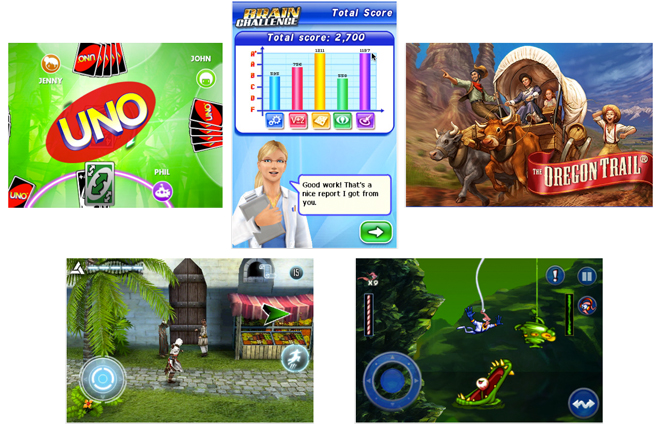 Gameloft jumped on the Windows Phone bandwagon and announced that it is launching five new games for Microsoft’s mobile platform. The games include Gameloft standards like UNO, Assassin’s Creed, Earthworm Jim, Brain Challenge, and The Oregon Trail. Two of the games, Uno and Earthworm Jim, are available now in markets outside of the US and can be purchased for £3.99 ($6.33 USD)

The US versions of these games will be available starting November 8th and will debut in the Windows Marketplace when Windows Phone handsets go on sale stateside. Assassin’s Creed, Brain Challenge, and The Oregon Trail will be available during the holiday season and will debut in markets worldwide. Gameloft is also working on future titles and plans to bring Asphalt 5, Let’s Golf 2, and Real Soccer 2011 to the Windows Phone platform.

These gaming applications are a nice addition to the Windows Phone marketplace and shows that developers are interested in building apps for this mobile OS. Unlike webOS which failed to grab the attention of developers, Microsoft has been able to garner developer interest and is launching its mobile platform with some big name developers on board. Having these highly desirable applications available at launch gives Microsoft a boost, especially in light of a recent research report that suggests most people download apps when they first get their phone. Press release for the gamers in our midst is after the page break.

Namco Networks is bringing another classic title to mobile phones - Ridge Racer Drift. The game has been released for...