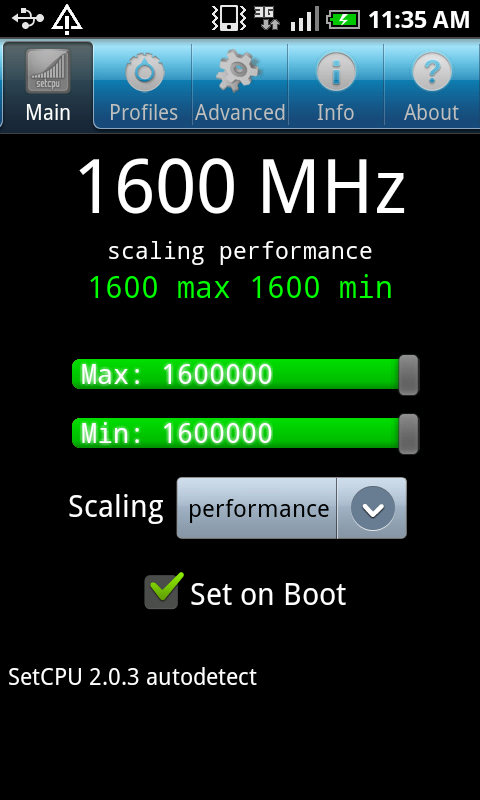 Well, we thought that the Samsung Galaxy S getting overclocked to 1.2 GHz was awesome, but we definitely weren’t expecting this. The Galaxy S has hit the speed of 1.6 GHz – faster than some netbooks today – and we couldn’t be happier.

The Hummingbird processor on this thing has been hacked to work overtime, and gives the Galaxy S a not necessarily needed, but welcomed speed boost. When benchmarking the overclocked handset, it hit a score of over 3000 on Quadrant. Moreover, when using the Neocore application to benchmark graphics, the Galaxy S hit a 78 FPS (Frames per second) thanks to the unlocking of the frame rate cap. I think this would make the Galaxy S the most powerful smartphone ever, easily.

According to the team who has accomplished the feat, this is just the beginning. They are looking to tweak their hackery even more, pushing the Galaxy S well past its limit – you’ll likely have a mini portable frying pan if they overclock any more. While this is just awesome, we could only imagine the battery life of the handset suffers worse than anything.

Most of the work was done using a Samsung Vibrant and the team expects to offer support for all Galaxy S variants. Right now, the Fascinate is out, as they do not have one to work with. Once they get one, they’ll be fast at work.

The Galaxy S has just raised the stakes on Android modding and hopefully this method can be implemented into other devices going forward. G2, you’ve been outclocked, lets hope you have some sort of rebuttal before long.

Currently, there isn’t a release candidate to give this a try for yourself, but you can expect one soon. If you’re the owner of a Vibrant, hit up the XDA forum to keep up with the project’s progress.

We haven't heard much news about the HTC Aria in quite a while, but it's better late than never, right?...