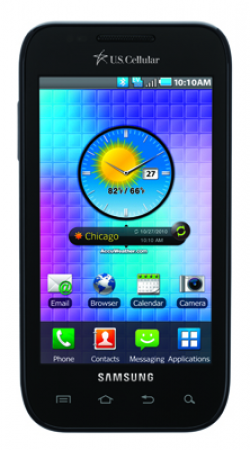 US Cellular has just launched their first Android-powered Galaxy S device, the Samsung Mesmerize. You can grab this phone now for $199 on a new two-year contract, a standard price for the Galaxy S line of Android smartphones.

The Mesmerize joins the HTC Desire and Samsung Acclaim in the US Cellular line up, and is easily the best phone out of the bunch when it comes to specs. The Desire is still just as drool-worthy as it once was, but now it’s going against the Mesmerize’s gorgeous 4-inch Super AMOLED display, and the 1GHz Hummingbird processor found in all of the Galaxy S devices. That said, the Desire sports HTC Sense, which is nicer than the TouchWiz UI found on the Mesmerize, so it’ll come down to personal preference, as the two handsets are very similar in specifications.

The Mesmerize is very similar to the Samsung Fascinate, as its body is slimmed down, lacking the hump on the back side that’s found on the original Galaxy S, and T-Mobile variant, the T-Mobile Vibrant. The handset also sports a flash with the 5 megapixel camera, something that’s sorely missing on a few of the Galaxy S devices, but present on the Fascinate and Epic 4G. Something that many will be happy to see missing is Bing, which is the default search engine used in the Fascinate. This really shouldn’t be much of an issue, but people have their preferences.

The handset is running on Android 2.1, like all of the current Galaxy S devices in the US, but will likely be upgraded to Froyo and Gingerbread in the future. We’re not sure when, but we can assume that the device has more than enough “oomph” to be able to handle the next OS update from Google. From personal experience, after using different variants of the Galaxy S for a while, these phones can be buggy. I’ve never hard a worse Android experience than I had with the Vibrant a while back.  Hopefully an OS update will put some of those woes to rest, but it’s just something to look out for.

If you’re a US Cellular customer looking to upgrade to a smartphone, you have one more great option to choose from. If you’re ready to grab one yourself, hit up the link below.

Acer launching a series of tablets on November 23rd

Acer is ready for the tablet wars, and is readying multiple tablets to launch on November 23rd at a press...