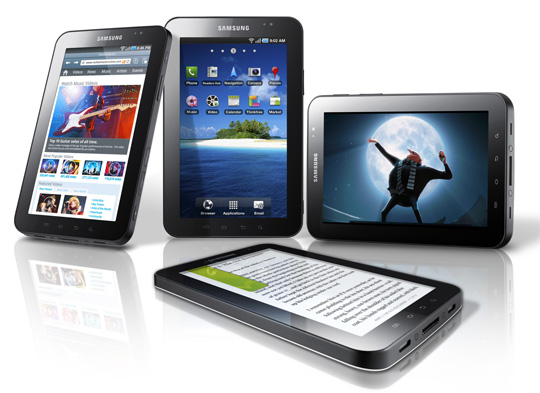 The Samsung Galaxy Tab is not just for the big boys in the US. Samsung and US Cellular confirmed today that the nations #6 carrier will be carrying the flagship Android tablet. The Galaxy Tab will be landing on five of the six top carriers in the US including Verizon, AT&T, Sprint, T-Mobile, and now US Cellular. The only one missing from this top six is MetroPCS which, thus far, has not confirmed that they will be carrying the tablet device.

Noticeably absent from Samsung’s press release are the date and the pricing for the US Cellular launch. Verizon, Sprint, and T-Mobile have come forward with their respective launch dates and pricing. We are still waiting for AT&T, and now U.S. Cellular, to reveal their Galaxy Tab plans. We reached out to US Cellular and the carrier confirmed that “currently, we do not have pricing info or an exact launch date” but the press release hints at a holiday launch.

Pricing has been a mixed bag for this tablet device. Verizon went the “no subsidy” route and will be offering the Galaxy Tab for a pricey $599 without a contract. Customers can sign up for a month-to-month data plan that offers 1GB of data for $20 per month. Sprint and T-Mobile will sell the Android tablet with a two-year customer agreement and a $399 price tag. Sprint customers will be able to activate the Galaxy Tab on a 2GB/$30 data plan or a 5GB/$60 monthly data plan. Both plans include unlimited messaging.

The Galaxy Tab will be available first from T-Mobile starting November 10th. Following T-Mobile is Verizon which will launch its version of the tablet on November 11th. Last but not least, the Sprint-branded Tab will make its appearance on November 14th. Anyone going to snag one when it launches? Anyone preference for carrier or pricing?

The US Cellular press release is on page 2.

Well, we thought that the Samsung Galaxy S getting overclocked to 1.2 GHz was awesome, but we definitely weren't expecting...