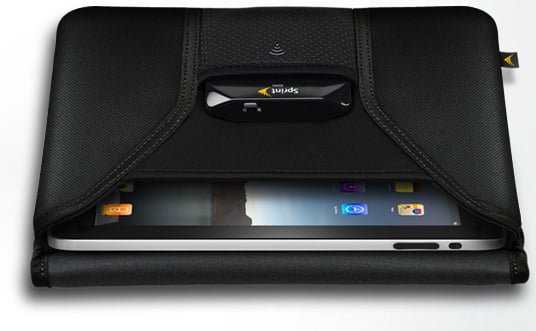 The iPad has gone on sale at Verizon and AT&T this week, but the Apple tablet has been helping Sprint all along, too. After coming up with a few clever ads showing the iPad running on 4G thanks to Sprint’s hotspot devices and combo cases (holding the iPad and mobile hotspot devices at once), it seems that a lot of folks turned to Sprint for iPad connectivity.

CEO Dan Hesse says that since a good chunk of iPad tablets sold are Wi-Fi models, the demand for devices like the Overdrive 3G/4G Hotspot has risen. And really, who wouldn’t want speedy Internet connectivity on the go?

GigaOm asked Hesse about its relationship with Apple and if there was anything in the works for the iPhone:

What about the iPhone? After all, iPad and iPhone seem to go hand in hand. When I joked with Hesse about how (unlike every other U.S. wireless company) his company wasn’t publicly linked to the iPhone, he declined to comment and politely added that Sprint doesn’t comment on its relationship with vendors and the conversations it has with third parties.

And indeed, for now, Sprint seems to be doing well with the BlackBerry/Android combination in its armory. The surge in Android users is largely thanks to devices like the HTC EVO 4G and Samsung Epic 4G – both running the Android operating system and capable of connecting to Sprint’s WiMax network. It also helped the 644,000 new subscribers that Sprint picked up over the summer.

Sprint also has its Simply Everything plans, which bundle voice minutes, data and messaging into some attractive and competitive packages. And if there is any worry that those might go away as soon as things improve for the carrier, Hesse assured users that won’t happen:

When I asked Hesse if smartphones were the key to his company’s turnaround, he pointed out that — in order of importance –- customer experience (which includes a great network and support), a simple value proposition, and then the devices themselves are going to be the key to Sprint’s future.

While the iPad has done much to help Sprint, it will see even more tablet assistance as the Samsung Galaxy Tab comes along before the holidays.

I'll be honest, I wouldn't know where to start if I wanted to learn to make sushi. I love eating...