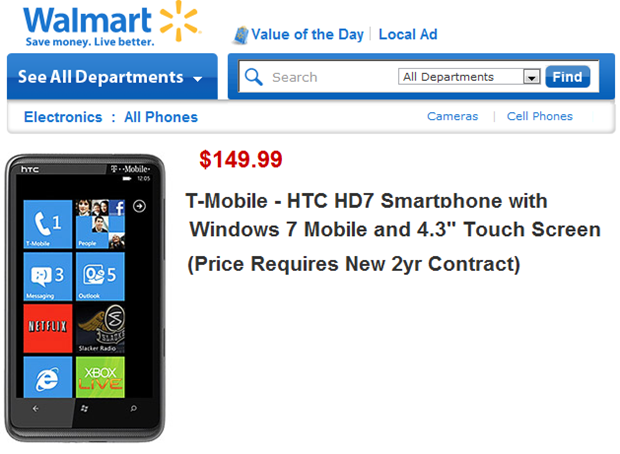 The T-Mobile HTC HD7 popped up at Walmart and is now available for pre-order from the retail giant. The Windows Phone handset is expected to debut on November 8th and will be one of two WP7 handsets to land at Magenta. The HTC HD7 is priced at a lowly $149, which matches the $149 offered by Wirefly and is $50 less than the $199 offered by T-Mobile and Amazon. All of these prices require a two-year customer agreement with T-Mobile.

With its 4.3-inch capacitive touchscreen display, the HD7 is the big daddy of Windows Phone handsets. In addition to its luxurious screen, this Windows Phone handset boasts of a 1GHz processor, a 5-megapixel camera with dual LED flash, 720P HD video recording, a kickstand and 16GB of internal storage. The HD7 is a multimedia powerhouse and will launch with Netflix, T-Mobile TV, and Slacker Radio pre-installed on the handset. Early reviews were favorable towards this handset and it will compete well against its similar-sized Android counterparts. With the Dell Venue Pro, the Samsung Focus, the HTC Surround, the LG Quantum and the HD7 landing in the US, the week of November 8th will be an exciting one for Microsoft and smartphone fans alike.

Samsung Galaxy Tab for T-Mobile Available for Preorder on Amazon

The Samsung Galaxy Tab is nigh and Amazon already has the T-Mobile version of the Android tablet up for pre-order....