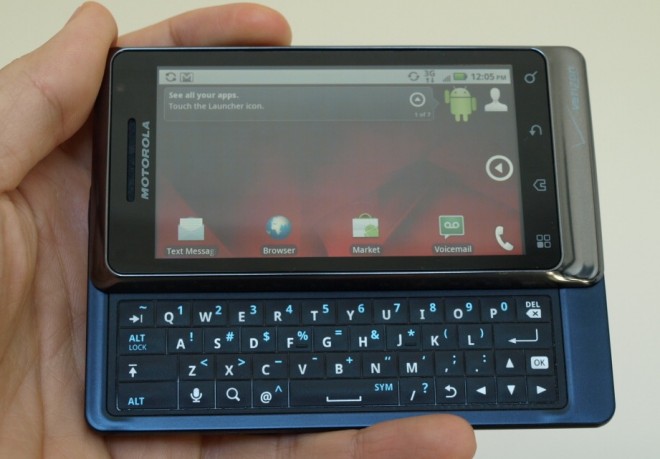 When the Motorola Droid was released last year, it was the first Android phone that offered a legitimate alternative to the Apple iPhone. A lot has changed in the smartphone world since then and the Droid 2 for Verizon is facing a crowded field of superphones. Does the sequel build upon the original or is this just an incremental improvement? 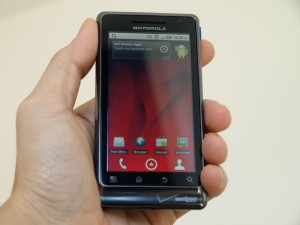 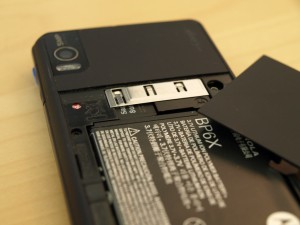 The Motorola Droid 2 looks very similar to the original but there are a few subtle improvements which make it a solid device. Are these enough to make it stand out though?

There’s a 3.7-inch screen that has the exact same resolution as the previous model. It’s funny how a year can change your expectations so much – the Droid’s screen seemed so spacious last year but with devices like the Droid X, EVO 4G and the Samsung Galaxy S lineup, I was craving a little more screen size.

It wasn’t just real estate though, as I somehow feel the 3.5-inch screen on the iPhone 4 feels more spacious due to the way the OS is optimized for the display. It’s not horrible by any means, but the virtual keyboard can feel cramped at some times.

Verizon users interested in this device are probably drawn to the full physical keyboard and this doesn’t disappoint. The slider mechanism feels the same as the original – a good thing, in my book – and the keyboard has been tweaked to make it easier to bang out messages.

The large, standalone dpad has been axed and that’s a good thing because it was fairly useless. Motorola has also given each button a slightly raised feel to make it easier to discern. There’s also no blank keys which was kind of mind boggling on the original.

The Droid keyboard wasn’t the best in the world but you grew accustomed to it over time. Overall, I’m very happy with the new keyboard on the Droid 2 and think that physical keyboard fans will adore it.

The rest of the device is quite similar to the original, although I’m thankful the battery cover firmly stays in place now. There is a camera button, volume rocker and microUSB port along the spines and the power button and standard headphone jack are on the top. These are slightly different from the original too, as each button and jack seems more contoured.

The internals have also received a boost, as the Motorola Droid 2 has a 1 GHz TI OMAP processor and you can definitely notice this when using the device. The thing runs like butter and the benchmarks are pretty impressive. There’s also Wifi (with 802.11n support), GPS, Bluetooth, 3G and the same 5-megapixel camera with dual-LED flash on the back.

The original device was sort of brick-ish and the Droid 2 is as well. At 169 grams, it’s not the heaviest handset out there but you can feel the weight in your hands.

If you liked the look and feel of the original Droid, then the D2 will be very appealing to you thanks to the stylish trip and the heavenly keyboard. It’s not the sexiest Android phone I’ve seen but it still looks quite handsome.

If you’ve ever used a Droid, I’d compare the D2 to a close friend who’s started going to the gym for a month: you notice they’re looking better around the edges but their core look is still the same. 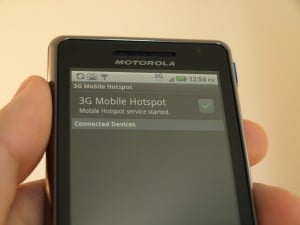 The Verizon Droid 2 comes with Android 2.2 but, unlike the original, it isn’t a stock version of the platform. Instead, it comes with a form of MotoBlur that can be found with the Motorola Droid X.

Don’t worry though, as this isn’t the in-your-face version found on the Devour, as it’s a subtle version which includes multiple widgets and a little bit of UI skinning. I’m not a huge fan of this because I don’t think it adds more than it detracts but at least it gets out of the way and doesn’t bog the system down.

For instance, there’s an aggregated social networking widget which draws in all your Facebook and Twitter updates. It works well for what it’s trying to do but I prefer interacting with these services separately. That’s a personal opinion though and some of you may prefer this all-in-one approach.

If you’ve read any of our recent reviews of Android phones, you should know what to expect from the platform by now. The D2 comes with Froyo and this means it’s simple to make calls, send text or e-mail, amazing integration with Google services, surf the web or add applications. Android is pretty darn mature now and the Market is now filled with more than 100,000 apps.

As for Android’s performance on the D2, the increased hardware made it run like butter … for the most part. Surfing the web is quick and easy but I ran into a stutter here or there when switching between apps.

I also had a heck of a time downloading apps for the first hour or two I had the device. I signed in with my associated account and wanted to throw the usual suspects on it (Facebook, Twitter, Pandora, etc.) and just couldn’t get apps to download. After about an hour and a half, I got the update icon in my notification bar and the D2 started downloading all the apps associated with my account on it. After this, I had no problems adding new apps.

The handset comes preloaded with some software and this is hit or miss. I dig that Skype Mobile is already on it but I don’t see the value of having the BlockBuster app on it – a program from a bankrupt company doesn’t exactly scream “cutting edge.”

There’s also a 3G Mobile Hotspot option included and it’s a breeze to set up and use. I don’t know if it’s worth the $20 or so a month but it’s an awesome and easy way to always have Internet.

As I mentioned before, the virtual keyboard kind of felt cramped. Luckily, it also comes with Swype and you can change this with a few clicks. I wasn’t on the Swype bandwagon early but I’ve grown used to it and love how easy it is to craft messages with one hand on the go.

I’m a Google guy when it comes to e-mail and calendar and Android is always great for this. The Droid 2 also has boosted Microsoft Exchange support (along with Yahoo, AOL, IMAP and POP), so the D2 should be a solid device for corporate Android users. It’s not quite as corporate friendly as the Droid Pro though.

While there’s a little bit of lag using the D2, it’s miles ahead of using the original Droid, even after it’s on Android 2.2. No word on when the next version of Android will come to the D2 but I’m fairly certain it has the hardware to stand up to whatever Gingerbread has to offer. 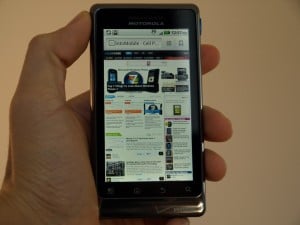 One of the big selling points of the D2 is that it is capable of playing Flash content thanks to the Flash Player 10.1. I’ve found this works pretty well but a lot of the content you’d want to access is either unavailable (Hulu) or not properly optimized for mobile (like some Flash games). The content will get there and it’s at least nice to have the option.

Other than that, it’s the standard Android browser: great JavaScript support, intelligent formatting of content, pinch to zoom and support for nearly anything you can throw at it. I hate to sound blase about the quality of it but times have changed – a rock-solid browser is the standard now and the Droid 2 delivers.

Android phones still aren’t as pretty as the Apple iPhone when it comes to multimedia but the Droid 2 can get the job done with various audio and video formats. It’s essentially the stock music and video player, so it’s easy to drag and drop files on your phone.

If you want an iTunes-like experience, you’ll be able to use the Media Share app to sync with Windows Media. I found this worked pretty well, actually. There’s also DLNA support to play your media on a computer or game console over WiFi and this also works pretty well and makes for some cool demos. I don’t see DLNA as a crucial thing to have for your everyday media usage but it’s nice to have. 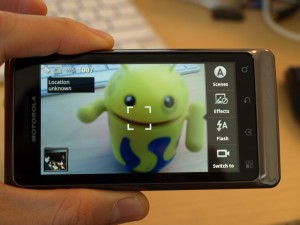 The Verizon Droid 2 has a decent camera but it’s not up to par with its competitors. The Droid was never a great shooter and it doesn’t look like Motorola went to any great lengths to improve it.

As you can see from the shots below, the photos aren’t very sharp and it actually takes a while for the camera app to load. It features the same camera software as the Droid X and this means diving through a bunch of menus to change your shooting mode. That’s true for many phones but it just seemed like an extra hassle with this clunky app.

To be fair, you do have multiple options when you’re shooting, as you toggle between the picture shooting mode, resolution of shots, ISO sensitivity, exposure and shutter animation. All photos can also be geotagged and you can set up online albums to upload to.

The dual-LED flash does give you some low-light shooting capabilities but it’s nothing to write home about. The auto-flash sensor is a bit weak in my book and close-up shots can get washed out.

Another bummer is that it can’t do 720p HD video recording, as it tops out at at 720 x 480 at 30 frames per second. Videos don’t look horrible (although a tad choppy) and the audio recording does sound pretty good outdoors, but HD video recording is also a feature that should be standard on a high-end smartphone nowadays.

Still, the Android OS makes it easy to upload photos and videos to various social sites like YouTube and Facebook, so it’s not all bad. I just wish Motorola had done more to improve the shooter. 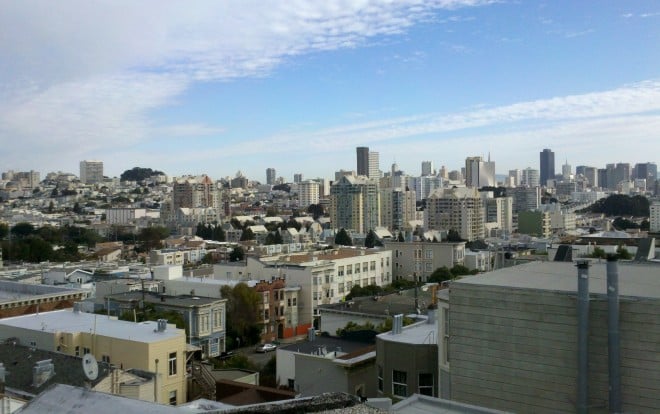 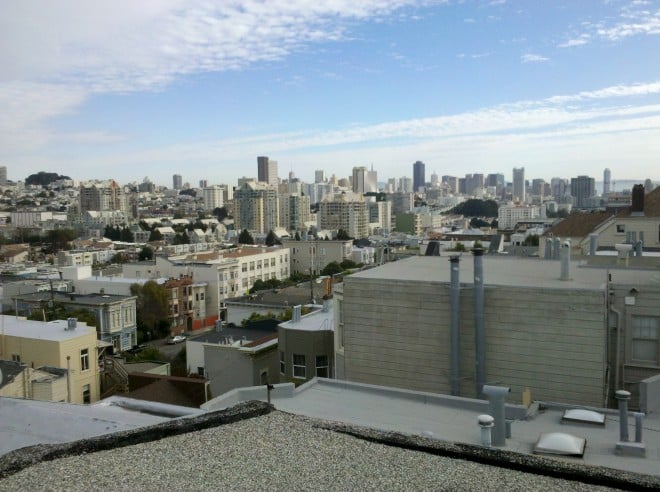 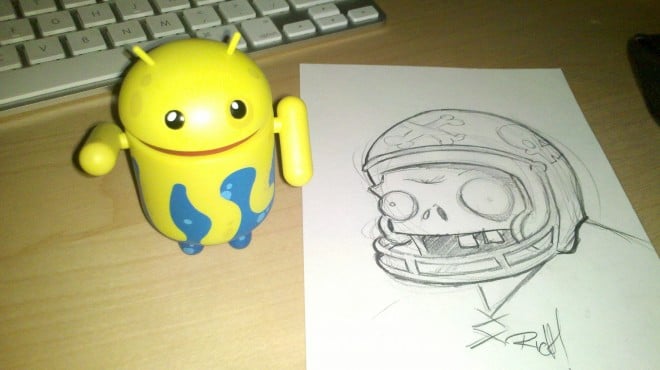 There have been reports that the Droid 2 can be plagued with reception issues but I didn’t find any using it in San Francisco. Call quality and data coverage were really good on Verizon and recipients of calls said I sounded clear. They could still tell I was on a cell phone but there wasn’t any hissing or major degradation of voice quality. I could also hear callers clearly too.

You should know the deal by now with smartphones: An overnight charge should get you through most of the day and the Droid 2 is no exception.

The Final Take: Is this the Droid you’re looking for?

The Motorola Droid 2 is a solid Android smartphone that does a lot of things right but it’s not a monumental improvement over the original handset. The revamped keyboard, boosted internals and Android 2.2 out of the gates are much appreciated but I don’t know if it’s enough to rocket this to the top of your must-have list.

The HTC Incredible and Droid X both offer sleeker and sexier devices with better overall experiences. When you couple in the subpar camera, I’d stay clear of this device unless you’re absolutely dying for an Android device on Verizon with a physical keyboard.

Mobile advertising to hit $5 billion by 2015

If you were wondering why Google was willing to spend close to a billion dollars acquiring the mobile ad firm...