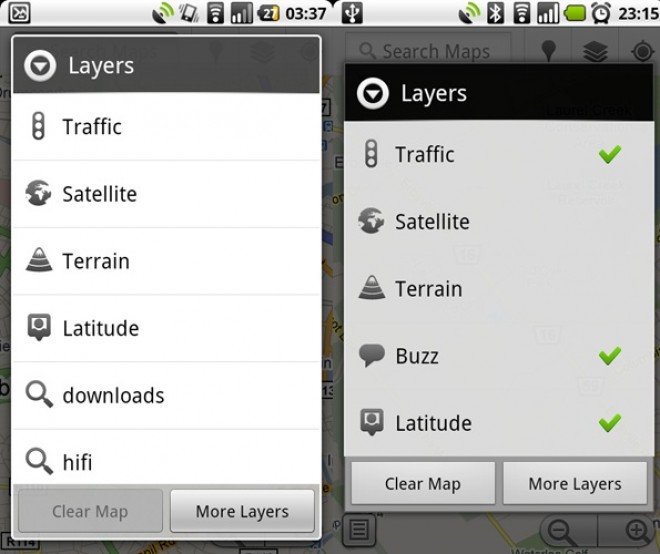 Here we go again now. Android 2.3, or Gingerbread, is all but far off on the horizon. It’s close, and we can almost taste it. The recent Google Maps update has allowed us to see just what some of these refinements may entail.

With a little API tinkering, Freenode IRC member canadiancow managed to give us a glimpse of what the Maps application will looking like using the API level 9, (Froyo used API level 8) and this is what he got. It looks like Google is taking the gray out of business, and going with a stark black styling for some headers, as seen in the picture above. While these are small refinements, they do look a little easier on the eyes, and we’re likely to find this throughout the Gingerbread system.

However, this really isn’t what we want to see. While it’s better than nothing, we are patiently awaiting the revamped UI of Android, and simple color changes won’t impress the people who’ve been following as closely as they can to the Gingerbread update. I’m sure there’s a lot we haven’t seen yet, but I fear that Android 2.3 may have gotten a little over-hyped, and if the update isn’t as stunning as people are expecting it to be, we’re going to hear a lot of complaining going on. And yes, I know we aren’t helping.

Nonetheless, Gingerbread does seem like it’s getting closer by the minute, as small leaks like this may be exactly what Google wants, only to blow us out of the water with something awesome. Duarte, don’t do us wrong now, we’re expecting some gold.

Whatever Google has come up with, it’s safe to say it’ll be a nice step up from Froyo, which is still an amazing OS version itself. Whether it’s the overall look, or a bevy of brand new features and services that make Android 2.3, we can’t wait to get it into our hands.

Google, the time frame you gave us for Android to blow our minds is running out. Just sayin’.

Finally, a mobile offering will be coming from LG that may not be too disappointing. After deciding to ice their...