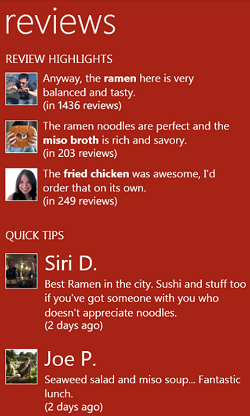 Today is the first day you can buy Microsoft Windows Phone 7 devices in the United States and I’m sure you want to load up your handset with apps. Well, you’re in luck because Yelp is bringing its app to the new platform.

On its blog, the company said its Windows Phone 7 program will enable users to use their location to find nearby restaurants, bars and other venues. As you’d expect, you’ll also be able to reader reviews, get directions and view photos of those locations.

I downloaded the Yelp Windows Phone 7 app on the HTC Surround and it looks pretty darn nice. It definitely looks like a Windows Phone 7 program but Yelp is able to keep its own brand awareness alive in the program. That’s a big thing for developers to keep in mind, I believe.

While the Yelp Windows Phone 7 program is visually nice, it’s not as robust with its features as the iPhone or Android versions. First of all, I couldn’t find a way to sign in to my account from the mobile version. You can also say goodbye to checking in via the app at your favorite restaurant.

This version of the program also gets rid of my favorite thing to show off on other smartphones: the augmented reality portion of the app. With the iPhone or Android version, you can click on Monocle mode and use the camera to overlay venue information over whatever you’re looking at. That’s not available in the Windows Phone 7 app because Microsoft doesn’t allow third-party access to the camera.

So, this Yelp app is still good for checking out information on venues near you but it’s not quite as good as the versions that are on the Apple iPhone or Android. Hopefully, the company will continue to update the program to make it on par with the other versions.

If you're in the UK, and carry a BlackBerry as your daily driver, the BBC iPlayer app for BlackBerry is...