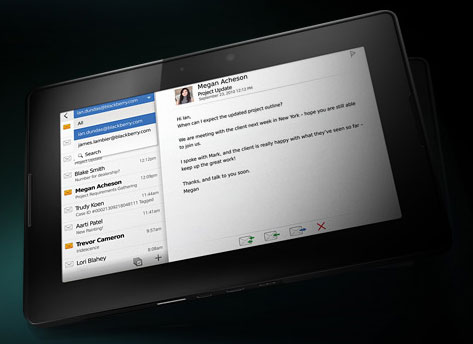 RIM’s co-CEO Jim Balsillie has confirmed that their upcoming BlackBerry PlayBook tablet will cost under $500. Whether or not that goes as low as the $300 – $350 we were hearing about at launch is anybody’s guess, but at least the PlayBook will be undercutting the iPad and the unsubsidized Galaxy Tab (though the latter has the bonus of 3G data at that price point).

The BlackBerry PlayBook will be the top-of-the-line tablet for at least a little while once it hits the market, boasting dual-core 1 GHz processors, 1 GB of RAM, a rear-facing HD-capable 5 megapixel camera plus secondary video conferencing camera, 7″ 1024 x 600 touchscreen, and a brand new operating system by QNX which specializes in stability, low power consumption, and high-end graphics. It’s only Wi-Fi and Bluetooth-capable for now, relying on a BlackBerry to tether to the internet, but 3G and 4G models are planned for the future.

Given those specs will beat out the current competition when the PlayBook launches in February, it’s surprising to see RIM will also be beating out the other tablets on price as well. However, it won’t be long before Apple announces their next iPad, and other manufacturers start using the tablet-optimized Android 3.0 Honeycomb to produce some serious competitors to the Galaxy Tab. Until that happens, however, it seems like RIM will have a solid lead in tablets for a decent stretch of time.

Take a look at our eyes-on with the PlayBook here, or scope out this video of the tablet in action.

Facebook fans must have been feeling pretty bummed when Facebook Places was announced, but was initially available only on the...