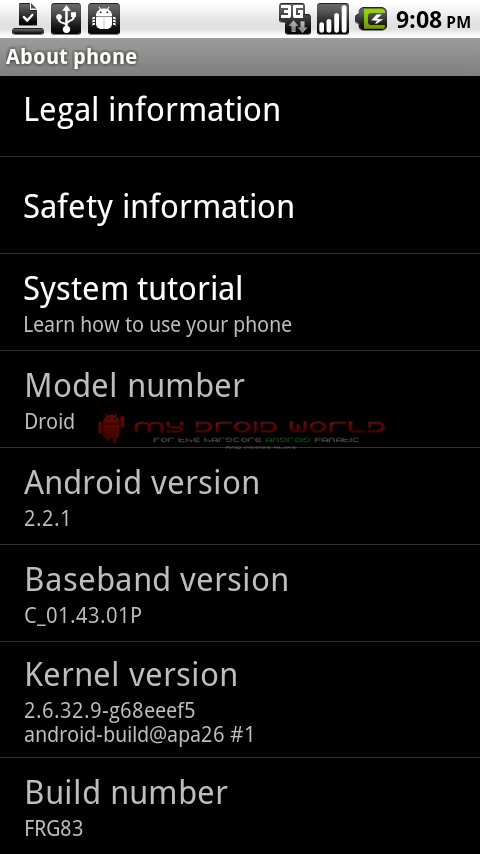 The rate at which Android handsets are being announced and released might make last week’s model seem like ancient history. But just because you bought the first Droid one year ago, you shouldn’t have to feel like you’ve been forgotten and unloved. As a matter of fact, the Android 2.2.1 FRG83 build has been leaked for you rooted users to enjoy. Sure, it takes a bit of hacking, but that’s half the fun of owning an Android device, right?

This would be the latest version of Froyo, in case you were wondering, and this is what the MyDroidWorld forums has to say about it:

The newest Verizon FRG83 has been deodexed, busyboxed, and given root.

*** IF YOU HAVE THE TeamBlackHat APP YOU CAN DOWNLOAD IT NOW ***

This is as basic as it gets, and if there is a problem due to my deodexing, don’t tell me. haha

***you will have the stock kernel that installs with this ROM, but shoot on over to my kernel page and get an O/C Kernel – P3Droid Kernels

If you have nothing but time tonight, visit the forums at the link below and follow the instructions. Let us know how it goes!

T-Mobile G2 users, get ready for some CyanogenMod 6.1 lovin soon, as Cyanogen himself has just tweeted that it's "done"....