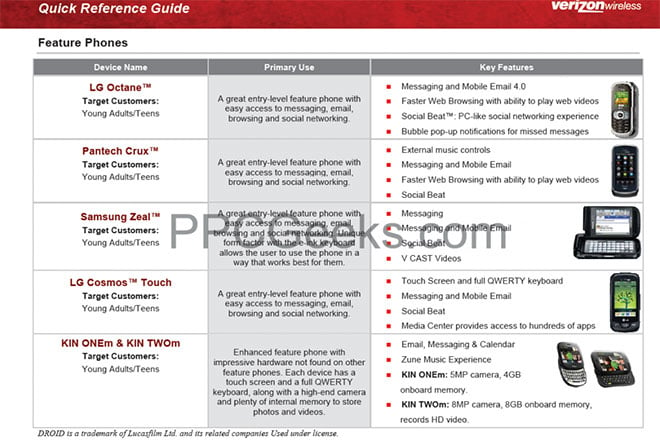 This is a bit of a shocker but apparently the ill-fated Kin ONE and TWO are slated to re-launch with Verizon in Q4 2010. This rumor arose from PPC Geeks and was reportedly confirmed as legitimate by Engadget’s sources. If you don’t believe it, take a look at leaked slide deck above which lists the Kin ONEm and TWOm as part of Verizon’s Q4 2010 lineup. Interestingly enough, the two devices are listed under the feature phone category which rids them of that cumbersome $30 data requirement.

The story of the Kin continues to unfold and gets stranger at every turn. These refreshed devices are presumably leftover inventory that Verizon and Microsoft are looking to offload. Removing the data plan requirement will certainly make the handsets more attractive to teens and tweens, the Kin’s target audience. Losing the data requirement comes at a price as the handsets may be re-launched without data-centric features like the Kin Loop. The Zune Pass will reportedly work over WiFi so Zune fans can breathe a sigh of relief.

Verizon may also be looking to get back into the good graces of Microsoft after the whole Kin debacle. Verizon was notably absent from the big Windows Phone roll-out which focused on AT&T, T-Mobile, and Sprint. AT&T and T-Mobile are already selling their WP7 handsets and Sprint is slated to debut its offering early next year. Showing the Kin a little love may help Verizon land a Windows Phone device when the CDMA variants land sometime next year.

[Via PPC Geeks and Engadget]