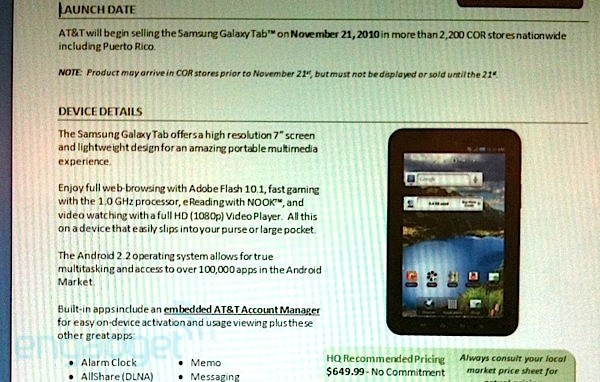 Reviews for the Samsung Galaxy Tab seem to be split right down the middle, but the carrier onslaught is happening, anyway. AT&T is the only carrier we haven’t heard much from, but it looks like a leak has revealed pricing for the device along with a possible release date. Apparently, the Android tablet is going to go for $649 and may arrive on November 21st. A bit pricey?

The price is without a contract, of course, so if you’re looking to save some dough on the Galaxy Tab and don’t mind committing to two years with one carrier, you might want to check out the Sprint model. At AT&T, you can pick up the iPad 3G + Wi-Fi model for $629, which is $20 cheaper and arguably probably a better deal than the Galaxy Tab given the reviews.

If you have your heart set on the Samsung Galaxy Tab, it’s good to know you’ll have options. The Android tablet will be available from every major carrier in the U.S. just in time for the holidays.