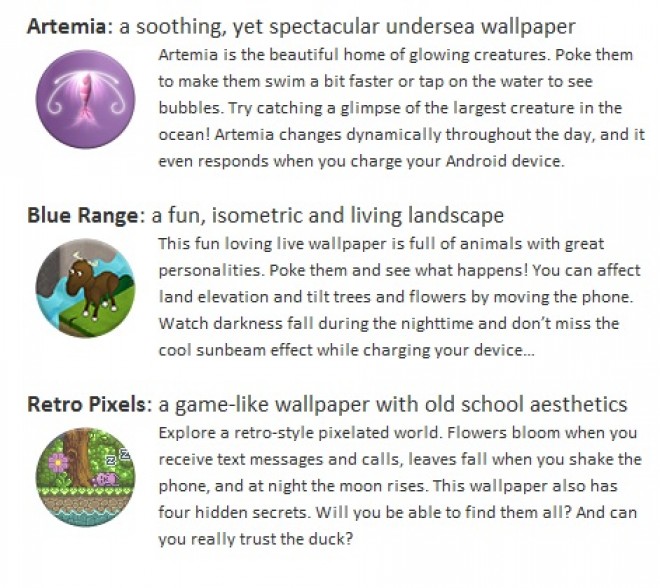 Every time we see something from The Astonishing Tribe, or TAT, we immediately want it, and then find out that it will not be released on the Android Market. This time around, however, TAT is offering up three new live wallpapers on the Android Market. The only problem is that I definitely don’t want any of them immediately. Funny how that works out.

We’re used to seeing amazing UI iterations from TAT, and their most recent, Horizon Contacts and Maps is no different. When we thought that any contacts app couldn’t be turned into a “fun” app, TAT proved us wrong. The only thing is that TAT’s customers are not consumers, rather handset makers and carriers. This has been quite the disappointment for those who’d like to get their hands on some of the companies’ amazing products.

This time around, the three new live wallpapers are on the Android Market.

These live wallpapers aren’t bad, mind you, they’re just not all that great. There’s Blue Range, Artemia,  and Retro Pixels, of which Artemia is the best of the three. It’s an underwater live wallpaper with jelly fish everywhere, and tapping on one will send it swimming up a bit. Tapping anywhere else on the screen will make bubbles appear, and you can also use the accelerometer to move the background around. Its simple and sort of nice.

The other two are decent. Blue Range can be interesting if you play around with it enough, but not as nice as the Artemia wallpaper. Retro Pixels is a bit lame, but some may love it. It honestly looks like one of the old Final Fantasy games with bad graphics, which might actually be a good thing. I may have not given this one a fair chance, as I played around with it only a couple of minutes.

From your Android phone, you can download the live wallpapers with the following links: Blue Range, Artemia, Retro Pixels.

Apple backs Oracle with Java in end-around attack on Android

Apple said it will be handing the reigns over to Oracle for Java, as it will be contributing its key...