Mac hackers and tech journalists are in high gear snooping through lines of code and calling up contacts ad infinitum trying to discover the what, where, and why of tomorrow’s big iTunes announcement. At the end of the day, we have two prevailing theories from the two different camps of sleuths. The first suggests that iTunes may get streaming audio or video, while the second suggests tomorrow will welcome the arrival of the Beatles to the iTunes catalog. 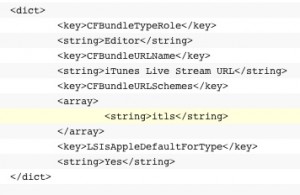 The first prevailing theory is based upon lines of code uncovered in iTunes 10.1 that point to a iTunes Live Stream URL. The reference appears in several sections of code and are reportedly only found in this latest version of iTunes. The iTunes Stream URL may be a file or service that is handled by iTunes. One section of code refers to an “its” string which is very similar to the “itms” string that is used to handle connections to the iTunes store.

While this is based upon supposition, it is interesting to note that Apple has tested live streaming by live broadcasting its latest press events. Apple is also building a new data center in North Carolina that could provide the backend capacity to support a large-scale streaming service .

The second theory points to the long-awaited arrival of the Beatles to the iTunes catalog. This rumor comes fresh out of the Wall Street Journal which has sources that claim Apple has worked on this deal with EMI as recently as last week.  The details of the negotiation have not been revealed. It is not known whether the Beatles will be an iTunes exclusive or will be available on other music services. This rumor, of course, is based upon word of mouth sources only and can not be corroborated.

We can continue to speculate but, in the end, we will have to wait until tomorrow to find out the details surrounding Apple’s big announcement. Any wagers on what Apple has in store? Will it be iTunes streaming, iOS 4.2, the Beatles, or something else?

Update: One of our readers (@vapzone) and Billboard point out that the clocks in the Apple teaser above bear a slight resemblance to the album art for the Beatle’s Help album. Not a confirmation but interesting.

[Via MacRumors and WSJ]

Orbitz launches iPhone, Android app and lets you book and purchase flights on the go

Orbitz has jumped into the mobile space with an iPhone and Android app. While there are plenty of other travel...