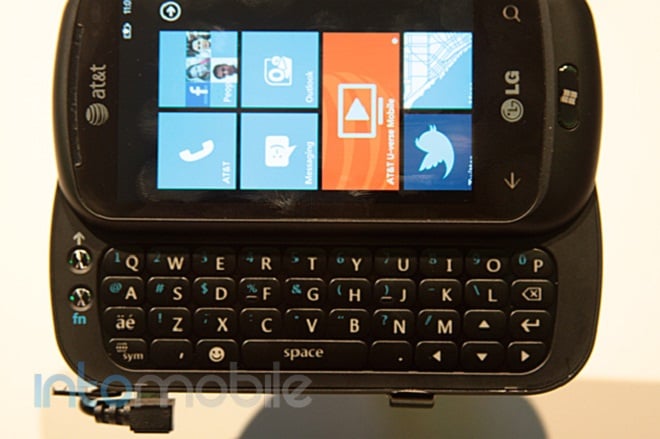 You can now get your hands on the LG Quantum for AT&T and this smartphone packs the new Microsoft Windows Phone 7 platform and a slide-out, physical QWERTY keyboard.

The LG Quantum stands out from the other Windows Phone 7 devices by having a horizontal-sliding QWERTY keyboard. Like the other devices, it features a 1 GHz Snapdragon processor, a 3.5-inch WVGA touch screen, a 5-megapixel camera and a few custom apps including the AT&T U-Verse app.

The standout feature of the LG Quantum is the Windows Phone 7 operating system itself. This is Microsoft’s latest jump back in to the smartphone game and it’s a major departure from its previous Windows Mobile platform.

You can check out our full review of Windows Phone 7 but you should know that it is a highly-usable, visually-appealing mobile operating system. Some users may not like that it is not quite as polished and mature as Android or iOS but it is a really good platform for first-time smartphone buyers and jumping over from another platform isn’t as difficult as you’d imagine.

AT&T is the premiere carrier for Microsoft’s mobile platform and it now offers three handsets with the new Microsoft mobile platform. The LG Quantum joins the Samsung Focus and the HTC Surround as AT&T’s Windows Phone offerings.

You can check out the review of the HTC Surround here and the Samsung Focus here. Each of the devices are similar when it comes to internal specs but we’re kind of partial to the Focus because of its gorgeous Super AMOLED screen.

Of course, if you absolutely need a full physical keyboard, you may want to stick with the LG Quantum. We also like the portrait keyboard on the Dell Venue Pro on T-Mobile but we’re a little bit worried about the confirmed WiFi problems.

What Windows Phone 7 handset do you like the best?

Verizon added two new LG handsets, the affordable Cosmos Touch and the Android-powered Vortex, to its lineup today. Both handsets...