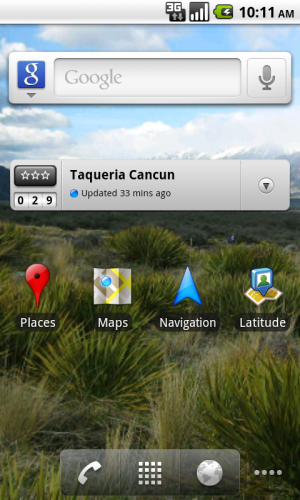 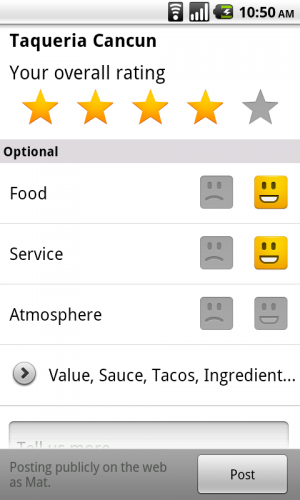 Today Google launched a new service called Hotpot (no, not “hotspot”, we made that mistake too). It’s a rating and recommendation engine that’s tied in with Places, Google Maps search results, and their Android app. Criteria include an overall 5-star system, as well as a thumbs up or down for food, service, and atmosphere. Previously, Google Maps on Android would pull in reviews and ratings from third parties, but this is the first time you’ll actually be able to submit your own ratings via mobile. There’s also a social element to it, in that certain spots will be promoted in your search results if one of your friends rated them highly, or if you’ve rated highly something similar before. The new Google Maps also comes with a home screen widget, so you can launch into a quick review of your nearest spot right away. iPhone users, sit tight – you’ll soon be getting some support for Places like Android did in the last update.

With Google taking firmer control of their rating system, I could see dedicated review networks like Yelp taking a hit. Folks are much more likely to quickly rate a location that they’ve got open in Google Maps for Android anyway than they are to download a dedicated app and review it there. I’m sure there will still be the hardcore folks who are already well-entrenched in those communities, but Google Maps is such a ubiquitous tool that even people who aren’t usually prone to reviewing venues will start participating. That being said, the recommendation engine is only really helpful if you have friends who actively submit ratings – without that, the whole thing is pretty shrugworthy.

Hotpot is a pretty cool service, and I’ll definitely be making use of it once it wriggles its way over to BlackBerry. There are a few features I’d like to see in the long haul, like tie-ins with Twitter and Facebook so I can share reviews with friends outside of the Hotpot network, and maybe some love for Facebook Places, Foursquare, and Gowalla so I can automatically check-in when submitting a review.

Android users, you can find Google Maps 4.7 in the Market, so long as you’re running 1.6 and up.