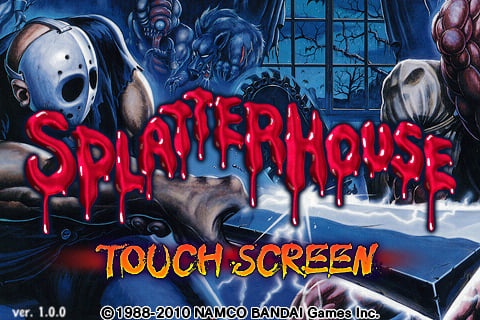 Last month, I visited Namco Games in New York City to get some hands-on time with some of their upcoming mobile games. One game in particular that I was impressed with was the mobile port of Splatterhouse.

Namco is going to be releasing Splatterhouse on the iPhone, JAVA, BREW, and Windows Mobile this week, and I got some time with a final review build of the game. So how does a 22 year old game translate on mobile devices? There’s only one way to find out. 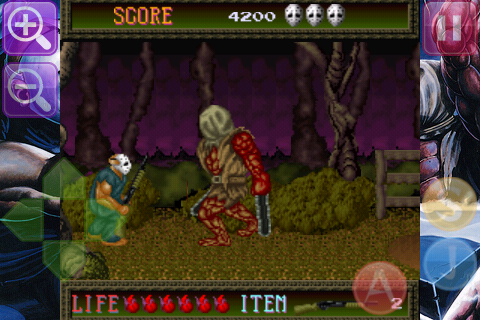 Splatterhouse brings the classic TurboGrafx-16 game to your pocket across a number of mobile OSes. The story is pretty simple: You play as Rick who has been left for dead. Luckily, a mysterious mask, called the Terror Mask, makes his way to him in order to revive him. Not only is Rick revived, but he’s turned into a hulking beast capable of destroying nearly everything that gets in his way. Rick needs to work his way through the West Mansion in order to rescue his girlfriend.

Each version of the game comes with the classic Arcade mode, which allows you to play all of the levels you’d find in the original game. As Rick makes his way through West Mansion, he’ll come across a number of grotesque monsters, paranormal activity, and bosses that are twice the size of Rick. Thankfully, West Mansion has weapons Rick can use, such as 2x4s and shotguns, that can easily dispose of any enemies that come across his path. 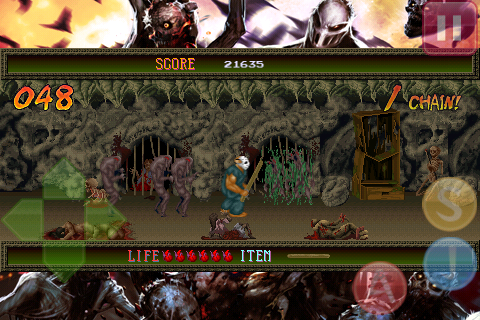 The iPhone version of Splatterhouse features an exclusive “Splatter Rush” mode that takes Rick and places him in a stage to fight eave after wave of enemies. The mode ends when either the time runs out or when Rick meets his early demise. Your Splatter Rush scores can then be uploaded and compared with your friends. Splatter Rush adds a good amount of replay value to the the total package as playing through the Arcade mode can be entertaining for only so long. It’s a shame only the iPhone version has Splatter Rush mode though.

FINAL THOUGHT: Splatterhouse offers a high amount of nostalgia to fans of the original game as it recreates the source material on mobile very well. The only issue I have with Splatterhouse is once you’re done with the Arcade mode, there isn’t much to go back to unless you have the iPhone version with its Splatter Rush mode. This is one of those games that old-school gamers will want to buy for nostalgia, but once the nostalgia runs out, it’ll probably end up being one of those games that just gathers dust.

Samsung is on a roll with its Galaxy S series of devices and its new Galaxy Tab Android tablet. The...