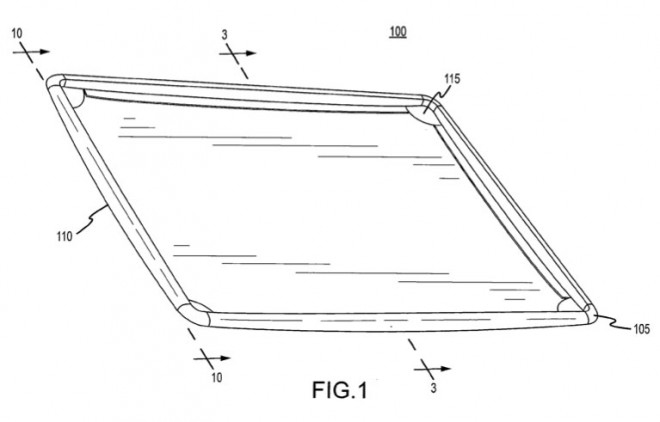 It almost sounds like something a street racer would do, but there may be a very slim chance that Apple will use carbon fiber for the iPad in the future. One of the main complains of the iPad is that it’s difficult to casually hold. While its shape, design and construction is a thing of beauty, it’s much prettier to look at than it is to hold. Aside from the shape and materials, it’s also quite heavy if you intend on holding up for an extended period of time.

Naturally, carbon fiber could fix some of those fatigue problems caused by weight without compromising the strength or integrity of the iPad. It just seems a little unusual for Apple to take this route.

According to a recently published patent entitled “Reinforced Device Housing,” Apple may be considering some material made of “layered fiber-in-matrix type material, such as CFRP,” or carbon fiber-reinforced polymer. Sounds fancy, but may prove to be just what Apple needs to make a lighter iPad.

The illustration is the reason we believe it will be used by the iPad, but there is a chance that it might find its way to other products, too.

Apple’s solution would employ either a layered carbon fiber material or a spine or frame made from the same material to support a carbon fiber skin. Using a frame or layers would ensure that the fibers would run in different directions, thus addressing the weakness of carbon fiber housings.

Apple is known for pushing the limits in materials and manufacturing technology when it comes to its products, so while this is only a patent application and not a certain indicator of things to come, it’s not beyond the realm of possibility that lighter, thinner and stronger products are in the cards for Apple in the future. After all, it was probably largely unimaginable four years ago that a smartphone would be built of glass and stainless steel, and today we have the iPhone 4.

Steve Wozniak, Apple co-founder and a nerd's nerd, recently gave an interview to De Telegraaf, a Dutch newspaper in The...