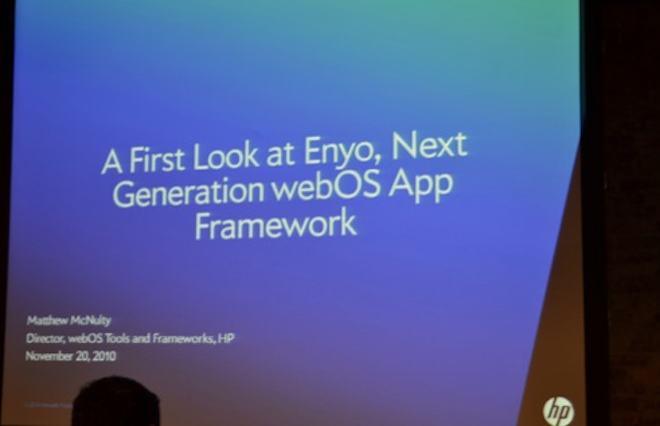 Palm’s webOS may or may not take off now that the once prestigious company is under HP’s wing, but one thing is certain: applications make or break a platform these days. The technology press love citing large numbers, whether it be the total number of apps available, apps downloaded, devices activated, whatever. Big numbers make headlines. Palm, looking to make webOS more attractive to developers, is working on a new way to write applications for their operating system called and they’re calling it Enyo. Today’s system, known as Mojo, is going to go by the wayside in 2011, which isn’t really a bad thing if you consider what you’re getting.

Enyo promises to better conform to HTML5 standards, enable applications to launch much faster, stop the memory leak issues that plague Mojo, allow multiple screen sizes and resolutions to be taken advantage of all within the same app, have hardware acceleration built in, and you’ll even be able to write an application using Enyo in a standard web browser.

Now let’s be serious for a moment. Developers care about one thing and one thing only: money. It doesn’t matter how terrible or how robust a development platform is, as long as it puts food on the table and a BMW in the driveway. Palm’s problem these days is that they have only one device on the market, and it isn’t even that pretty to be honest. That’s going to change over the next 12 to 18 months, that much has been confirmed by Jon Rubinstein himself, but how attractive are those devices going to be?

Any Palm webOS applications you’d like to see? I’ve yet to touch anything running the OS, so I can’t comment on what the platform excels in or falters with, but as a former Palm addict I’m eager to see the company bounce back. They are innovative, and they just need to go back to their roots of counting each and every single tap it takes to get something done and go back to relentless pursing to decrease that number.

Measure your Heart Rate on the iPhone 4

Have you ever wanted to measure your heart rate using your iPhone? I know I haven't. However, if you're of...