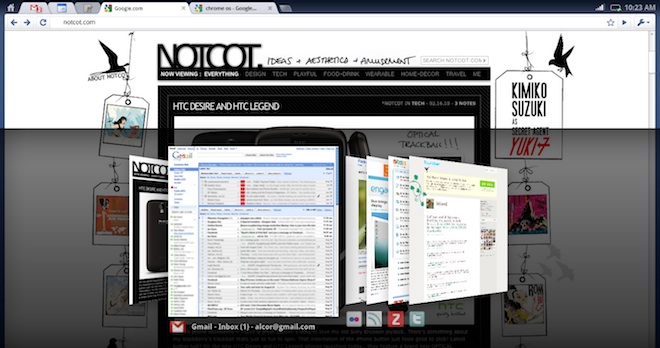 Google’s upcoming Chrome operating system was supposed to come out by the end of this year, but that’s officially not going to happen says eWeek. It’s a shame since we were really looking forward to looking at what the Mountain View, California based company could do given complete control over the BIOS and other system components that make up a typical laptop. At IntoMobile we mainly write about mobile phones, but everyone on the team also loves mobile gadgets of all shapes and sizes. Apple’s latest creation, the 11.6 inch MacBook Air, is absolutely stunning, and many of us are lusting after it like a dog sitting patiently in front of a barbecue grill, waiting for the chef to accidentally drop something.

So when is Chrome OS going to come out? “In the next few months” according to CEO Eric Schmidt. That’s again quite sad news, but we’d rather have something that isn’t riddled with bugs. Acer, Samsung, Dell, the typical players in the laptop scene, are all planning on releasing a Chrome OS notebook. Whether an Intel or ARM based CPU will power the whole experience is another question all together.

When it comes to small, always on computers, and with how people are using the web today to run everything from productivity applications, communications via social networking or instant messaging, to entertainment with YouTube and the myriad of Adobe Flash games that range from terrible to addicting as a line of blow, Google is trying to push us towards a world where applications don’t matter. That’s good for users, since the platform shouldn’t be important, but what about developers? They need to get paid so they could put a roof over their head and food and Mountain Dew in their fridge. How else are they going to come out with that perfect farting application?

Like it already doesn't have a full portfolio of different cases, case-mate is teaming-up with modern industrial designer Erik Arlen...