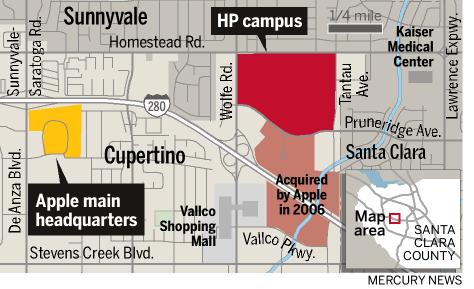 Even the most jaded of technology watchers has to admit that the past few years have absolutely been stellar for Apple. Say what you will about their tight vertical integration model, their tyrannical CEO Steve Jobs, and the price of their products, but Apple has found a successful formula for practically printing money and to no surprise this has let them hire more people. Roughly 12,300 employees were added this year alone to the already 46,600 employee strong work force. That’s a lot of heads when you take into account the few products they actually make.

“We now occupy 57 buildings in Cupertino and our campus is bursting at the seams,” said Apple’s Steve Dowling. “These offices will give us more space for our employees as we continue to grow.” The offices Steve is talking about are where Hewlett-Packard used to reside. It’s a landmass totaling 98 acres and while the price of the plot hasn’t been revealed, local real estate experts are saying that it’s worth at least $300 million.

What will the magical boys and girls of Apple come up with next now that they’ve got all those people and all that space at their disposal? Many have said that Apple should start making their own televisions or increase their footprint in the home appliance space. What’s the future of iOS and Mac OS X going to look like when Intel starts making processors that are both small enough and power efficient enough to fit inside mobile phones? Is the iPad/iPod/iPhone family going to grow with more form factors and different sized screens?

Three years ago the iPhone and iOS didn’t exist. Two years ago Google Android didn’t exist. Any long term projections about what either Apple or Google are going to do in the mobile space are most likely going to be inaccurate.

The upcoming Google Nexus S is one of the worst kept secrets in the history of Android devices. Not only...