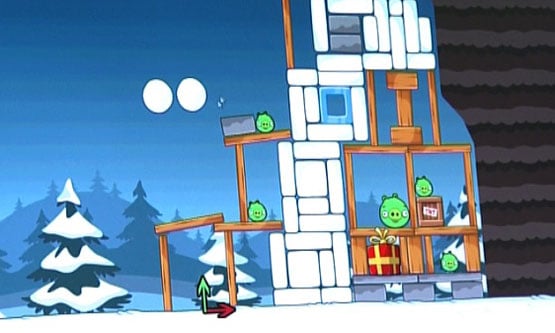 Rovio Mobile confirmed earlier this month it was working on a Christmas version of Angry Birds. Rovio promised its Christmas edition would be “cool” and “a bit different, too”. While Rovio has been quiet on the details surrounding the game, the first screenshots from Angry Birds Christmas have hit the internet courtesy of a Finnish website MTV3.fi. The leaked image depicts a snow-laden game environment filled with pigs and presents.

According to the source, the Christmas game is expected to début sometime before December, a timeframe that fits perfectly with its holiday theme. No word on the price but it should be priced around 99¢, the same price as the Halloween version. No doubt this version of the app will be popular among Angry Birds fans; the Halloween version launched in October and sold 1 million copies in a mere six days.

Angry Birds is at the top of the iOS game charts and the Android version was downloaded over 1 million times in its first day of availability. Fan fervor will also be high during the month of December as fans have established December 11th as a global Angry Birds Day. Meetups are being organized around the world and Rovio is planning announcements to commemorate the event.