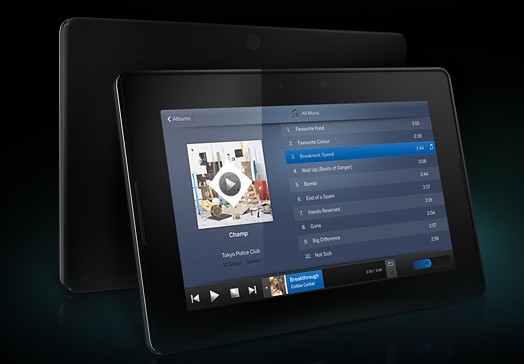 The source of a video showing a BlackBerry PlayBook outside the vigilant auspices of RIM PR and marketing has suggested the three price points of the upcoming tablet. Apparently the version with 8 gigabytes of storage is going for $399, the 16 gigabyte one for $499 (both under $500 as promised) and the 32 gigabyte version will go for $599.

For those who haven’t had a chance to check it out, the BlackBerry PlayBook is RIM’s first tablet. It packs a whollop of a spec-sheet, including a dual-core 1 GHz processor, 1 GB for RAM, 7-inch 1024 x 600 capacitive touchscreen, 5 megapixel camera plus secondary 3 megapixel camera for video calls, and a new operating system by QNX built for stability and multimedia.  We’re expecting the PlayBook to be available in February, or at very least within the first quarter.

The only problem with this pricing rumour is that we haven’t heard a peep about an 8 GB version of the PlayBook, and there’s no mention of the 64 GB version, which is definitely official. One can only hope that it’s actually the 16 GB version that will be going for $399, the 32 GB for $499, and the 64 GB version for $599, because if not, then the PlayBook will exactly match the iPad’s pricing. That could be bad news, since I doubt many people will be willing to pay just as much money for a smaller screen and a less-developed application market. RIM should be making every effort to undercut the iPad, because its successor is just around the corner…

If you’d like to see the PlayBook in action, be sure to see how its browser fares against the iPad, or how it handles multitasking. Personally, I’m really pumped for the release, and look forward to RIM eventually bringing the new Flash-capable OS to their handsets. Anyone else for sure picking one up next year, now that you have an idea of the price points?

Apple buys 98 acres of land in Cupertino, roughly doubling their size in the area

Even the most jaded of technology watchers has to admit that the past few years have absolutely been stellar for...