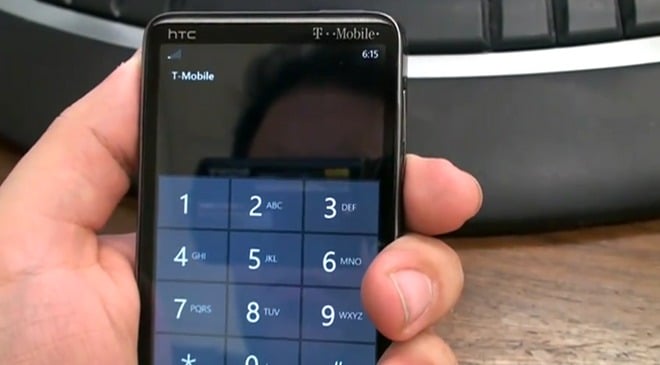 Perhaps the Antennagate issue that plagued the iPhone 4 wasn’t exclusive after all – just like Apple said. The HTC HD7 – one of the latest in a series of new Windows Phone 7 handsets – appears to suffer from a little user interference, too. The T-Mobile handset is depicted in a video where it seems to show strong signal strength when lying on a table all by its lonesome, but then loses connectivity the moment it’s picked up and grabbed just like the iPhone 4.

Why is this happening? Well, it’s simple, really. The antenna is located near the base of the HTC HD7, like many other smartphones, and blocking the wireless transmission with your hand is going to kill the signal. It’s not a conspiracy and there certainly isn’t some dramatic flaw in the design. It’s just that when you grip the phone in a certain way, you’re probably going to lose reception unless it’s exceptionally strong wherever you are. Judging by the video, it seems like you have to do it just right in order to make the signal bars go down. Just like the iPhone 4.

Can this be fixed with a software update? Perhaps, but probably not. Software isn’t going to magical reorganize the phone’s internals and place the antenna elsewhere. One YouTube commenter said the following about the video:

I stumbled across a possible fix for the reception issue. I’m not saying it will work for everyone but it worked for me.Worth a try if you have the same problem.

All i did was change the sim to a different network, do a hard reset of the phone with the other sim in, reboot then put my normal sim back in. Now the lowest my reception goes to is 2 bars which is quite good round here as the reception generally? isn’t great.

It doesn’t really sound like much of a fix for the HD7 to me. The difference between one bar and two could be between -105dBm to -110dBm, which I can’t really consider a solution – it’s still some crappy signal strength any way you slice it.

Until then, will we have to employ the Steve Jobs solution of just not holding it that way?

Microsoft has done quite a job cultivating the developer ecosystem for its recently-launched Windows Phone 7, as the platform already...