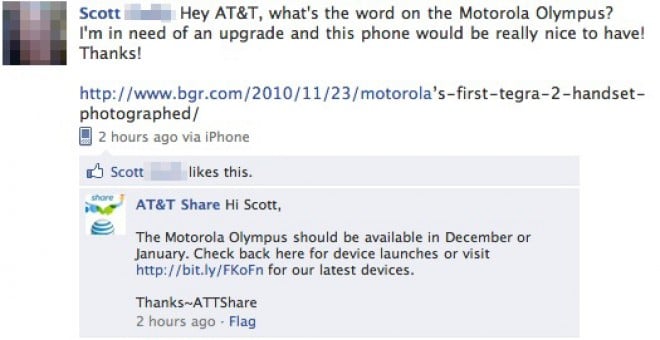 Remember the Motorola Olympus? Of course you do, as it’s the handset maker’s first NVIDIA Tegra 2-toting handset. For sometime now we’ve expected to see the Olympus hit Verizon retail shelves in the first quarter of 2011, and that’s about as specific as we’ve heard when it comes to a release date. Facebook painted a different picture, however, and it looks like we may actually see the handset as soon as next month!

Someone on Facebook decided to ask the AT&T Share page a question regarding the availability of the Motorola Olympus’ availability, and the response was about as surprising as it could be.

The Motorola Olympus should be available  in December or January,”

That’s all you really need to read, as that’s something we definitely were not aware of. If this does turn out to be true, Motorola’s first dual-core Android powered handset may soon be upon us, possibly before the end of the year. That said, I’d lean closer towards the January timeframe, as I’d imagine that Motorola may want to make a splash at CES. Then again, there will likely be many devices running NVIDIA’s Tegra 2 chipset, so maybe Moto wants to throw this beast into the ring and beat the rest of the competitors to the punch.

While we’re still a bit skeptical, tablets with the Tegra 2 are already available right now, so at least there’s no doubt that the chipset isn’t yet ready for prime time, but timing certainly should play a  factor. December is only a few days away, and we’re likely going to be hearing more about this handset very soon, along with other Gingerbread handsets, and of course, Gingerbread itself.

Anyone holding out for this handset? Let’s hope we will have a stock Android phone in our midst, that’s all I’m asking.