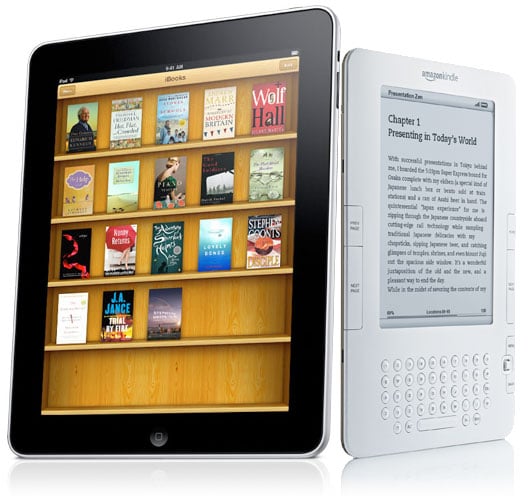 A recent ChangeWave survey suggests the Apple iPad is gaining ground on the Amazon Kindle. Long the leader in the eReader market, the Amazon Kindle is slowly beginning to drop from its top spot as a mobile reading device. In a survey of 2,800 respondents, the number of Kindle owners dwindled from 68% in February 2010 down to 47% in November 2010. At the same time, the number of iPad owners has doubled from 16% in August 2010 to 32% in November 2010.

Future sales of these eReader devices also follow this trend with 42% respondents indicating they would buy an iPad and 33% would buy a Kindle. Other eReaders, such as the Nook and the Sony Reader, are less popular with only 4% and 1% potential buyers interested in these devices.

The survey also takes a closer look at usage of the iPad and Kindle and reveals what most of us already know – the Kindle is used primarily to read eBooks and the iPad is used to read eBooks, newspapers, magazines, and blogs. This usage is not surprising when you look at the differences between these two devices. Amazon’s popular eReader features an e-ink screen and is designed to mimic the look and feel of a traditional book, while the iPad is a multimedia device which is the perfect medium for graphic-rich newspaper and magazine content.

It will be interesting to see how these survey results play out during the holiday season. Apple is pushing its iPad by distributing it through many brick and mortar and online retailers, but has remained firm to its $499+ price point. Amazon is trying to win big by reducing the price on it Kindle eReader, but is still conservative in its distribution chain. Anyone willing to predict which device will come out the winner when we close the door on 2010 and say hello to 2011?