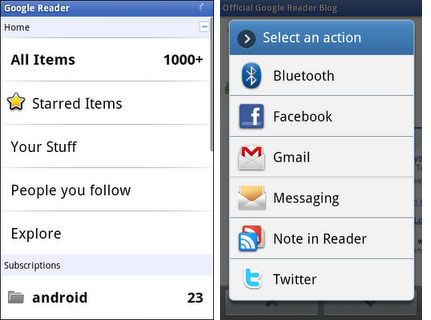 Android users with a Google Reader account can say goodbye to the web interface and hello to a dedicated application. In a short but sweet blog post, Google confirmed that the official Reader app is now available for free from the Android Market. The app interface is a great improvement over the web-based experience that mobile users were previously forced to use.

Overall, the official Reader application is a nice alternative to other news reader apps, especially if you use Google Reader as your primary RSS reader. Its free price tag and support for a myriad of features makes it a no-brainer for Android users to download and try. The lack of a widget, though, is a glaring omission and one reason Android users might pony up their cash and stick with a third-party alternative like Feedr. If you give the new Reader app a whirl, let us know your first impressions in the comments.