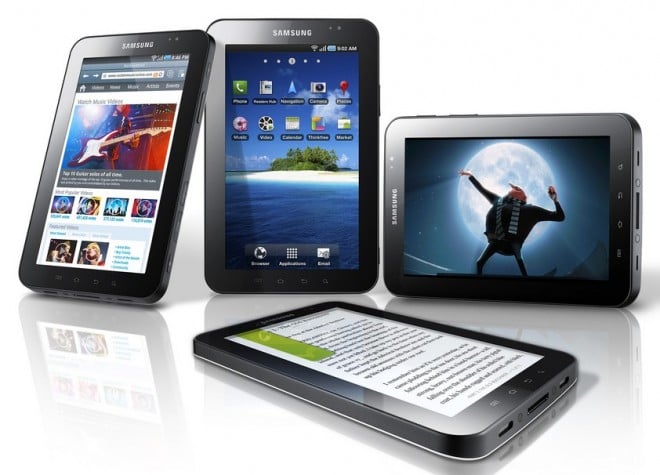 Heads up bargain shoppers, Radio Shack is offering the Sprint Galaxy Tab for $349, a $50 discount off the normal retail price. You will need to hoof it down to your local store as the sale is available in store only and check first before you start the trek as the deal is available in select stores only. The sales lasts until December 11th so you have another nine days to save some cash on this hot, new Android tablet from Sprint.

In the month of November, the Galaxy Tab launched on five major carriers in the US. Unlike Verizon and AT&T which sell the tablet contract-free, Sprint, US Cellular, and T-Mobile offered the tablet device on a contract-basis with a subsidized price. Keeping pricing consistent, the trio currently sells the Galaxy Tab for $399 with a two-year customer agreement. As it has done with the T-Mobile G2 and other mobile devices in the past, Radio Shack is taking a $50 hit on the Galaxy Tab to undercut the carrier’s pricing and attract customers to their store.

Samsung’s tablet device has turned out to be wildly popular. Though US-only sales figures are not yet available, Samsung has confirmed that it has sold over 600K tablet devices in the first month of global sales. At its current rate, the Android-powered tablet is on track to hit the 1 million milestone by the end of 2010. How much do we like the Samsung Galaxy Tab? Check out our hands on review here to find out!

We've talked about the Fuze Meeting app before and it was a cool way to turn your iPad or other...