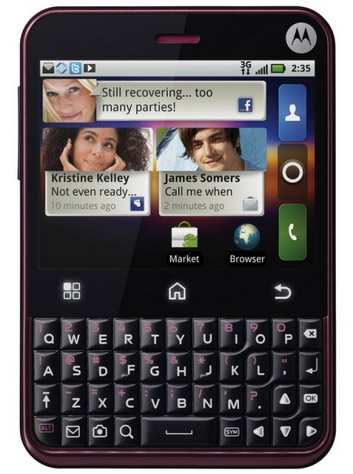 Aircel is bringing the Motorola Charm to India. The country’s fifth largest GSM operator is offering the Android-powered smartphone for Rs. 13990, both on prepaid and postpaid plans.

I guess you know the Charm’s key features already. In case you don’t, you should know it’s a QWERTY keyboard-equipped device boasting a BlackBerry-like form factor, 2.8-inch QVGA touchscreen, HPSA and WiFi connectivity, 3.2-megapixel camera, GPS, Bluetooth, FM radio and a microSD expansion slot. Aircel is selling the device with a 2GB memory card, which should be enough to store quite a few songs and even few video clips.

I always thought of the Charm as a potential BlackBerry killer device. Unfortunately, it doesn’t look as businessy as RIM’s phones, but thanks to the familiar form factor – it should make transition from BlackBerry OS to Android more convenient. Now if it only had a screen with higher resolution (HVGA), it would be a smashing success… Motorola are you listening? 🙂

Cellular South kicked off a new promotion that offers AT&T customers up to $100 for their iPhone when they buy...