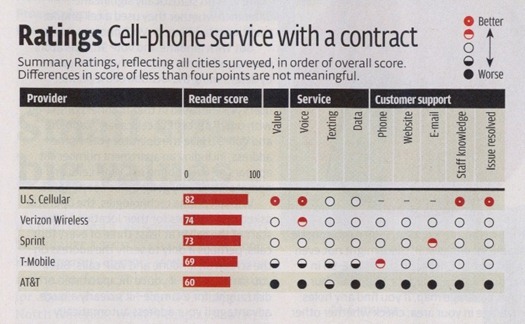 Consumer Reports is at it again with its U.S. carrier rankings, and AT&T has come in dead last. Last year, AT&T was last in customer satisfaction and this year it didn’t change much as it looks like it just received negative marks all across the board. Being the nation’s second largest carrier, one would think that the exclusive carrier of the iPhone in the U.S. would invest more in delivering better performance and customer service. And speaking of the iPhone 4, Consumer Reports never retracted its recommendation against purchasing the device.

Not only did AT&T fall well into last place nationwide, but in individual cities it was well below the other carriers, too. In Detroit, for example, Verizon and T-Mobile were near tied with scores of 75 and 74, respectively, while AT&T was at 55. In Houston, Verizon and Sprint took the top two spots with scores of 77 and 72, and the iPhone carrier was down at 61 in last place.

So who took the top spot of the four major carriers nationwide on the Consumer Reports survey? Verizon – home of the Droid and an army of Android handsets. Not only is Android rising in popularity and market share, but users are generally very satisfied with the platform and the devices as well. So it’s not surprising to see Verizon with happy customers in that department, but it seems that in terms of voice quality, value and customer service, it beats out all the other major carriers as well.

Overall, U.S. Cellular is number one, but its availability is limited to certain markets and regions. However, it’s good to know that if you ever find yourself signing a U.S. Cellular contract, you’re likely going to be satisfied with the overall experience.

But AT&T didn’t let this report move forward without a fight:

We take this seriously and we continually look for new ways to improve the customer experience. The fact is wireless customers have choices and a record number of them chose AT&T in the third quarter, significantly more than our competitors. Hard data from independent drive tests confirms AT&T has the nation’s fastest mobile broadband network with our nearest competitor 20 percent slower on average nationwide and our largest competitor 60 percent slower on average nationwide.  And, our dropped call rate is within 1/10 of a percent – the equivalent of just one call in a thousand – of the industry leader.

Sure, a record number of subscribers chose AT&T in the third quarter, but the carrier also had record iPhone sales, too. It’s also difficult to convince users that your network offers the fastest mobile broadband speeds when coverage is spotty, and you have many customers covered by T-Mobile’s HSPA+ network and Sprint’s WiMax network. Perhaps it’s also true that AT&T is the leader in dropped call rates, but the experience varies dramatically by location.

I’m hoping that AT&T does take this report seriously. While I haven’t had too many issues lately, there were plenty of times over the last year where simple customer service calls would take nearly 45 minutes to an hour, and my data speeds would be lightning fast in one area, and slow as molasses just a few blocks away.

What about you? Are you an AT&T customer satisfied or dissatisfied with your service or experience?

Amazon.com has a great exceptional offer for those of you who want to grab the Motorola Droid Pro from Verizon...