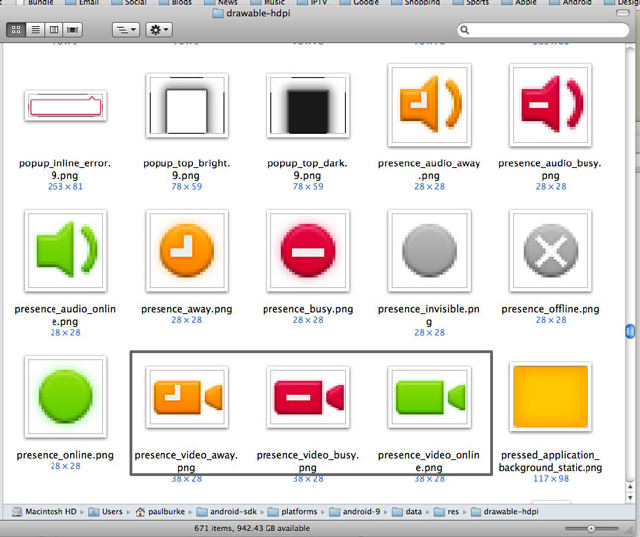 One conspicuously absent feature in the Android 2.3 Gingerbread announcement yesterday was the rumoured video chat capabilities. Andy Rubin hinted at the feature in Honeycomb yesterday when unveiling an unannounced Motorola Tablet, but more solid evidence was found right in the Gingerbread SDK.  Those familiar with Google Talk will recognize those three camera status icons which indicate a user is capable of video chat, and whether they’re idle, busy, or free. The only real question now is when (or if) Google flips the switch to enable the feature on devices.

Seeing as the flagship Android 2.3 device, the Samsung Nexus S, has a forward-facing camera, one would hope that it’s put to good use. Plenty of other recent Android handsets, like the Samsung Galaxy Tab, the myTouch 4G,and the Transform all come with forward-facing cameras, so it wouldn’t be unreasonable to see some associated functions unlocked in a future OS update.

Apple’s implementation of FaceTime in the iPhone 4 doesn’t seem to have popularized video calling all that much, but I have a feeling that if Google’s able to make it a more ubiquitous feature in Android handsets across a wide array of carriers and manufacturers, and there’s high-speed bandwidth to support it, video calling may yet take off.

What do you guys think – given the opportunity, how regularly would you make a video call on your Android phone?

Life is rough for Sprint Epic 4G users who are patiently waiting to get onto Android 2.2 Froyo after seeing...