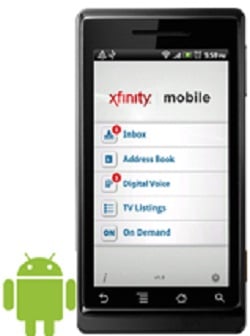 Comcast is making a big push in the mobile space and it has just released its Xfinity app for Android.

“We’re excited to broaden the availability of our Xfinity Mobile app to Android devices, as we know there were many customers awaiting this release,” said Cathy Avgiris, Senior Vice President and General Manager, Communications and Data Services, in a prepared statement. “We won’t stop here. We’ll continue to extend access to our services outside the home with convenient apps that our customers can use anywhere, anytime and on as many different devices as possible.”

This is just the latest attempt by the cable company to boost its mobile offerings, as the Xfinity program for the iPad turns the tablet into a killer remote. Comcast is also preparing the next generation of apps which will turn these tablets into killer video machines.

According to Light Reading, Comcast will have an Xfinity iPad app in the coming weeks that streams movies and television shows to the Apple tablet. It is expected to launch with premium content from the likes of HBO, Starz and Showtime but all of Comcast’s content should eventually come to this program once it can secure the rights.

This is a smart way of utilizing these devices which could be seen as competition with services like Hulu Plus. Instead, the Xfinity apps just add value to these devices and make it more difficult to cut the cord entirely.

The program is available now and it’s free in the Android Market.