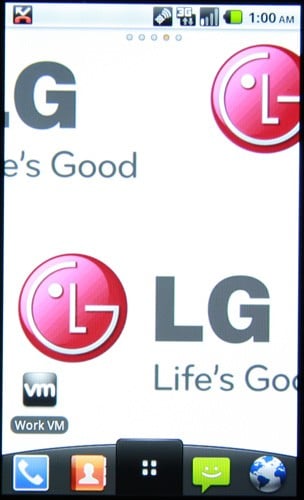 LG and VMware are partnering to bring Android to the enterprise using virtualization. VMware announced its Mobile Virtualization Platform back in November 2008 and promised to created a handset environment that would provide a customer with true multiple profiles. Profiles, when applied to current handsets, refers to a set of ringtones and alert settings that are customized for specific usage scenarios and can be changed easily when needed. VMware and LG will take the concept of profiles one step further by letting you run two distinct profiles, which include applications, contacts, music, and more, at the same time on one handset using virtualization.

VMware and LG showcase this virtualization using an Android handset. You can have a personal profile with the full suite of Android applications, social networking tools, personal contacts and a personal phone number. You can also have, on the same handset, a business profile with corporate controlled applications, no social networking tools, business contacts, and your business phone number. The two environments are independent of each other so you wont have to worry about accidentally sending the photo from your bachelor’s party to your boss.

LG and VMware see this virtualization as way to break into the corporate environment where a struggle over control of employee mobile phones is brewing. Am mobile explodes, more and more businesses will provide employees with smartphones for secure corporate usage. Employees do not want a five year old BlackBerry, they want the latest handset and want to use it to its full potential. This virtualization would bridge that gap and let employees have full control over the personal side of the phone, while the corporation can control the business side of the phone. Dr. Stephen Herrod, the CTO and senior vice president of R&D at VMware sums it up when he says,

“We are excited to work with LG to develop mobile solutions that address the end user desire for affinity and the enterprise desire for manageability, security and control.”

Interestingly enough, Verizon Wireless is one of the wireless carriers interested in offering this virtualization technology saying that they have seen “interest from Verizon Wireless customers in the area of mobile personas, which allow a personal mobile phone to be leveraged in a professional setting in a secure way that is IT-approved.” LG and VMware are expected to debut their first Android smartphone with mobile virtualization technology in 2011.