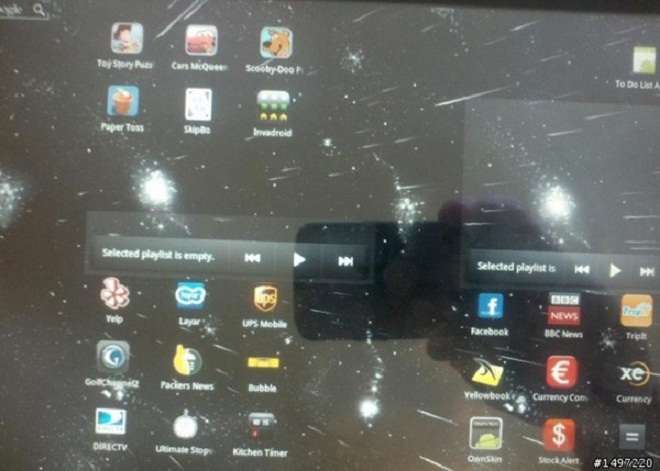 We know that Google has been showing off an unannounced Motorola Android Honeycomb tablet and a spy has reportedly landed a picture of the so-called MotoPad in action.

The picture above is not the greatest quality but it could be the first time we get a clear look at the Motorola Android Honeycomb tablet. This is supposed to be the 3.0 version of the platform which will be optimized for tablets.

What does that mean exactly? Well, Google’s Andy Rubin previously showed off how developers will be able to create apps that have multi-pane views. This could help users take advantage of the extra space which will be present on this type of form factor.

Other than that, there’s not much more we can glean from this spy shot of the Motorola Android Honeycomb tablet. It will reportedly come with a 7-inch or 10-inch screen, the rear camera will be 5-megapixels while the front-facing camera will be 2-megapixels, it will be powered by the dual-core Tegra 2 chip, will come with 32 GB of internal memory and it will have a microSD slot for expanded storage. Engadget also says it will come in multiple varieties with UMTS, CDMA and 4G LTE support.

That last part is what makes me drool about the Motorola Android Honeycomb tablet because I’ve been tooling around with the Samsung Galaxy Tab and love the always-on data. If this so-called MotoPad could access the super-fast 4G LTE Verizon network with reasonable no-contract options, I’d be very happy with it.

T-Mobile and Sprint both said it will have 4G tablets in 2011 and I wouldn’t be surprised to see these introduced at the CES show in early January. I think this MotoPad could easily be part of the successful Droid lineup, so how does a 4G-enabled DroidPad sound to you?

The Google Nexus S launched with an integrated NFC chip manufactured by NXP. According to a report from NearFieldCommunicationsWorld, the...