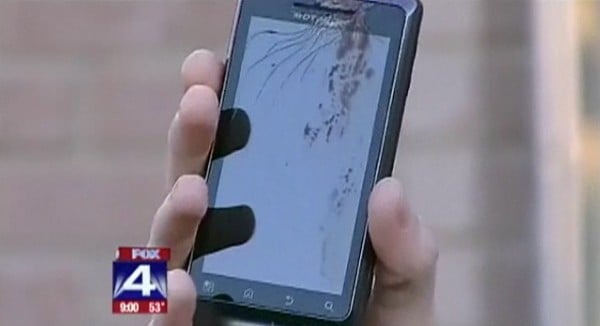 The saga of  Aron Embry, who will aways be known as the man with the exploding DROID 2, continues to develop. A statement from Motorola given to an employee at PC Magazine claims the explosion was a misunderstanding on the part of Embry. The DROID 2 in question did not explode, it was dropped prior to use. The fall from grace cracked the screen and the unsuspecting man was cut when he placed the cracked screen to his ear.

“[The Droid 2] was a phone that got dropped. [T]he guy didn’t notice the glass had cracked […]so when he put it to his ear, he cut himself.” [T]he only things that could explode in a phone would have resulted in a phone that did not work, yet this phone worked. And there was no explosive damage to the device (things inside blown outward, etc).”

Motorola substantiates its claim by pointing to the fact that the handset continued work, which would not be possible if there was an internal explosion powerful enough to crack the screen. Motorola also notes that there was no visible explosive damage to the phone. The glass was broken, but not broken outward.

The only item left unaccounted for is that “popping” sound Embry heard when he put the handset to his head. It is possible the drop damaged the speaker and caused the popping sound. Perhaps, he heard some noise associated with the phone call itself. Unusual sounds are common when there is interference nearby or  the person is in an area with poor cellular connection. Ay thoughts?

Since October 2009, BlackBerry has slowly but steadily been losing sales on America's top carrier, Verizon Wireless, to Android handsets...