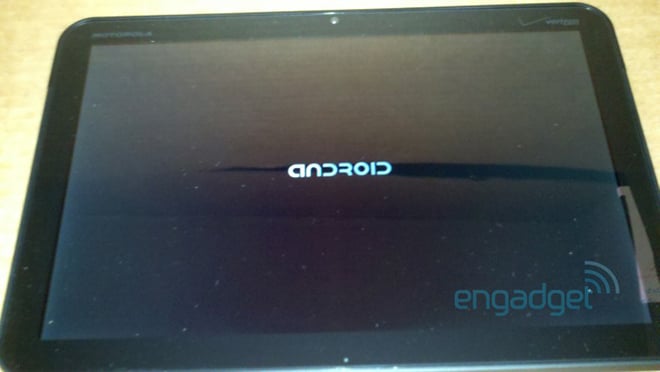 Leaked photos give us an up close and personal look at Motorola’s first Android-powered tablet. The photos are shot in typical Mr. Blurrycam style and show off the front, back, and sides of this 10-inch device. On the surface, you can spot a front-facing camera, rear-facing camera with flash, a micro-USB port, HDMI port, 3.5mm headphone jack, and an unmistakable Verizon Wireless logo. One photo of the bottom of the device may also show two contact points for a dock which would be an expected accessory. Other Motorola DROID models have a desktop dock and a tablet is just perfect for usage as a media player, desktop calendar, or more in this upright orientation. 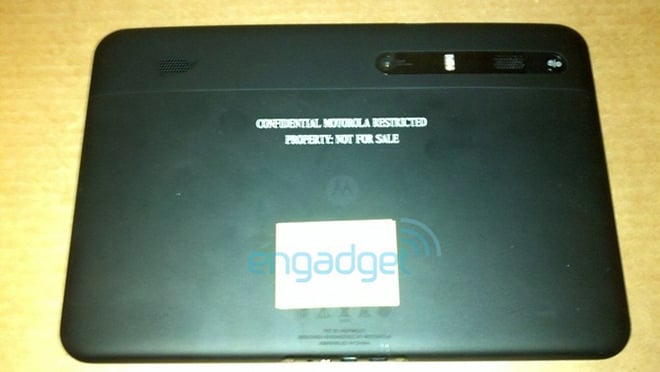 Underneath the hood, the Motorola device is rumored to include a 1GHz Tegra 2 T20 processor, 32GB of storage, a 10-inch display with 1280×800 resolution, 512MB of RAM, and microSD expansion (up to 32GB). The tablet is powered by Android and will launch with the tablet-optimized Honeycomb version sometime next year. The tipster did not confirm the connectivity options, but we assume WiFi is a given and LTE is a strong possibility. The slate may also include a media tie-in to Verizon’s FIOS cable service.

Originally rumored as the Stingray and then Everest, the tablet is also known internally as the “Trygon”. The tipster did not know which, if any, of these names would receive the stamp of approval as the final, retail product name. It is also not known whether this slate will launch with the Verizon DROID branding or will be a plain jane offering like the Motorola Devour. I would assume the former as the power and size of this 10-inch tablet just screams DROID. If the tablet is launched with all the features we expect from a DROID device and a price tag that rivals the Galaxy Tab and the iPad, which would be your first choice when you hit a Verizon store with cash in hand?

Verizon Wireless confirmed late last week that its USB LTE modems can experience a delay when transitioning from an EVDO connection...