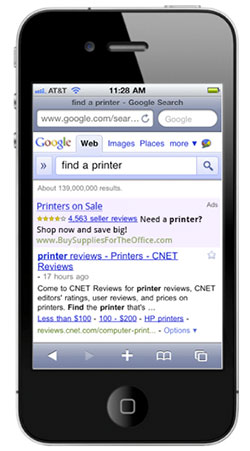 Metric after metric shows that mobile usage is on the rise so it’s not surprising to see Google chime in with its own data. Google examined its Q3 2010 search results and discovered that mobile search has grown over 130% year over year. The figure was released as part of an announcement for its new mobile seller ratings, a feature designed to help all these new people who are searching via their mobile phone.

Seller ratings is a Google search feature that lets users view ratings for merchants with Google ad campaigns. If you search for Xbox 360, the top sponsored results will include retailers like Amazon, Dell, and Wal-Mart. Each of these ads will include a rating that is complied from merchant review sites across the Internet. The ratings are clickable and will take the user to a comprehensive list of reviews. Previously only available on the desktop, Google is now bringing these seller ratings to the search results on your mobile phone.

The ratings will help all those mobile shoppers in our midst. According to data from ABI research, almost 50% of mobile phone owners have used their phone to do some virtual shopping. This trend also extends to non-smartphone owners, 17% of which are interested in mobile shopping, even though their handsets do not easily support it. PayPal has certainly experienced this increase in mobile shopping – its Black Friday sales results show an astounding 310% increase in mobile transactions year over year.

While these numbers are impressive, they will continue to increase during 2011. NFC is on the horizon, mobile payment is latest buzz word, and the always-on connectivity offered by WiMAX and LTE is coming soon to a tower near you. According to Juniper Research, these factors and others will combine to produce a mobile retail market that will exceed $12B in 2014, up 25% from $4.1 billion in 2009.

Japanese common courtesy dictates that while you're on a train you shouldn't use your mobile phone. They take it very...