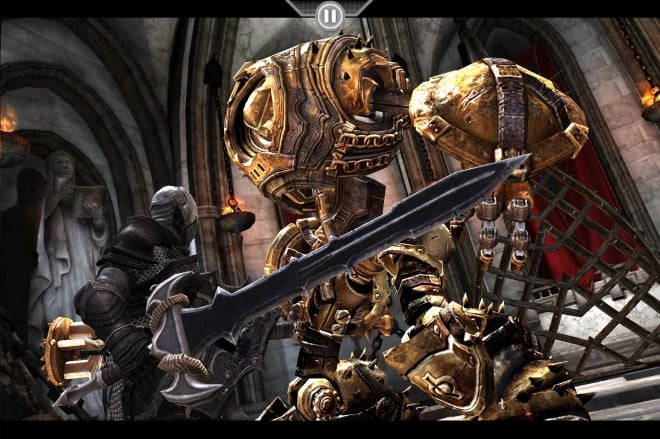 Do you enjoy sword fighting action-RPG games? Well according to the latest figures from Apple’s Game Center, it looks like a lot of you do as Infinity Blade has reportedly grossed approximately over $1.6 million with more than 270,000 users downloading the app on both their iPhone & iPads combined just 4 days from its official launch on December 9th. And as each minute passes, that number continues to increase. With over $1.6 million in sales, Infinity Blade has easily taken the spot for top grossing app, which was held by Chillingo’s Cut The Rope with $1 million in sales in 10 days.

If you haven’t read our review of Infinity Blade, first of all, shame on you! Infinity Blade is Epic Games’ and ChAIR Entertainment’s first foray into the iPhone & iPad development world. The game has you playing multiple bloodlines of a knight’s lineage and as you level up one bloodline, each following bloodline retains the previous’ experience, stats, and gear. Infinity Blade is also the first game to make use of Epic Games’ Unreal Engine which gives the game a stunning amount of graphical detail on a mobile device. We felt that this title was an important step for mobile gaming as it not only shows what is possible when a mobile game is created by experts in console and PC gaming, but it also steps the bar up for competing companies to offer the same level of detail as Infinity Blade has.

We also learned from this latest report that when it comes to games on the iPhone and iPad, you sure do love to slice things up, whether that be huge, monstrous enemies, or some string that happens to be attached to a piece of candy. I guess that also explains why Fruit Ninja is popular among the kids.

Will the Verizon iPhone have 4G LTE service?

It's almost guaranteed that Verizon will be landing the Apple iPhone next year but there are still questions about what...